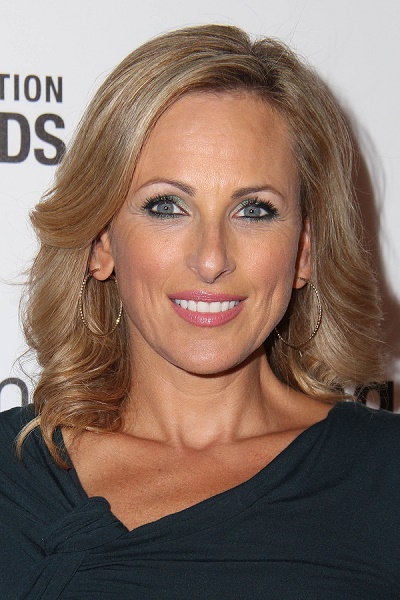 Matlin in 2014, photo by kathclick/Bigstock.com

Marlee Matlin is an American actress, author, and deaf activist. She won the Academy Award for Best Actress for Children of a Lesser God (1986). She is the only deaf actor to win an Academy Award, and the youngest winner of Best Actress (at 21). She has also starred in the films Hear No Evil and CODA, among others. Her longtime interpreter is Jack Jason.

Marlee is the daughter of Libby and Donald Matlin. She was raised in Reform Judaism.

Marlee is married to police officer Kevin Grandalski, with whom she has four children. Kevin is Catholic, with Polish ancestry.

Marlee’s maternal grandfather was named Paul/Pincus Hammer (the son of Itzkhak/Isaac Hirsh Hammer and Gittel/Gertrude). Paul was born in Poland. Itzkhak was the son of Jacob/Jake Hammer and Fannie.

Marlee’s maternal grandmother was Ruth Tekler (the daughter of Harry/Hersh Lieb Tekler and Leah Krikofsky). Ruth was born in Poland. Leah was the daughter of Isadore Itzchak Kikarsky.

I have brought Judaism into my home and married it nicely with my husband and his family who are Catholics. We are equal opportunity when it comes to holidays and traditions…

Unfortunately, where I live there is not a temple with a signing rabbi, and though I’m sure I could go to a local temple with an interpreter, I prefer to take the lessons I learned, the richness of Judaism and the culture that my parents passed along to me, and share it with my family, making the best home that I know how to. By the way, I’m finally fulfilling a lifelong dream, one I’ve had ever since I was bat mitzvahed — I am traveling to Israel this summer for the first time on behalf of the Ruderman Foundation… I plan to look up my family and take in all the Holy Land sites.

Genealogy of Marlee Matlin (focusing on her father’s side) – https://web.archive.org