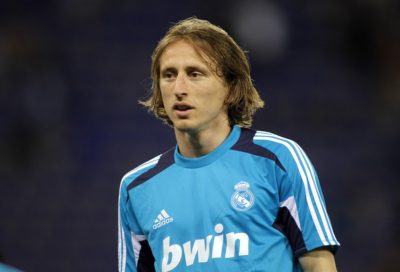 Modrić in 2013, photo by Maxisports/Bigstock.com

Luka Modrić is a Croatian professional footballer. He plays as a midfielder for Spanish club Real Madrid, and captains the Croatia national team. He won the Ballon d’Or 2018.

Luka is the oldest child of Radojka Jasminka Dopuđ and Stipe Modrić. He was raised in the hamlet Modrići, near Zaton Obrovački, a village close to Zadar in SR Croatia, then a republic within Yugoslavia. Modrići is in the southern slopes of the mountain Velebit.

The Croatian War of Independence occurred during his childhood. In 1991, when the war escalated, his family were forced to flee the area. His father joined the Croatian Army. Luka’s grandfather, also named Luka, and six other elderly civilians, were executed by Serb rebels in December 1991 in the village of Jesenice.

Luka is married to Vanja Bosnić, with whom he has three children.

On his mother’s side, Luka is descended from Ilija Dopudj. Ilija was the son of Stjepan Dopudj and Marija Zupan.