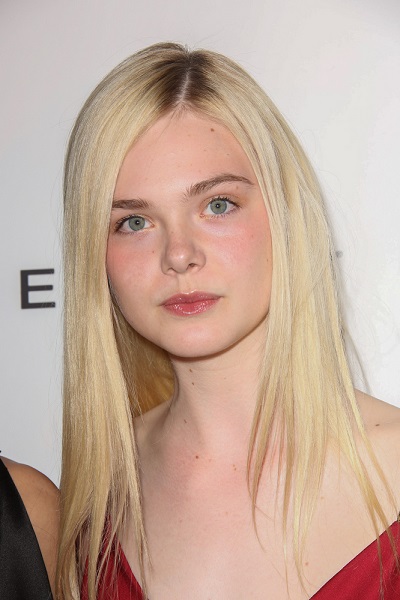 Fanning in 2014, photo by Prphotos.com

Elle Fanning is an American actress. She is known for starring as Alice in Super 8, as well as in Phoebe in Wonderland, Somewhere, We Bought a Zoo, and, as Aurora, in Maleficent, among other films. She is the younger sister of actress Dakota Fanning (Hannah Dakota Fanning).

Elle is the daughter of Heather Joy (Arrington) and Steven J. Fanning. Her father played minor league baseball and her mother played tennis professionally. Elle’s father is of approximately one half German and one quarter Irish descent, with his other ancestry being English, French, and Channel Islander [Jersey and Guernsey]. Elle’s mother’s family has lived in the United States for many generations, and Elle’s mother is of mainly English, and remote Scottish and Welsh, ancestry.

Her aunt (mother’s sister) is ESPN reporter Jill Arrington. On her mother’s side, she is descended from Joseph Martin, a brigadier general in the Virginia militia during the American Revolutionary War.

Elle’s paternal grandfather was William Edward “Bill” Fanning (the son of George Joseph Fanning and Dorcas Florence Godden). William was born in New York, New York. George was born in New York, to Irish parents, Edward William Fanning and Catherine/Catharine Connelly, who was from Donegal. Dorcas was born in the Bronx, New York, the daughter of George Henry Godden, who was born in St. Helier, on the island of Jersey, U.K. Channel Islands, and of Dorcas Caroline Thoumine, who was born in Saint Peter Port, on the island of Guernsey, Channel Islands. Elle’s great-grandmother Dorcas also had English and French ancestry.

Elle’s paternal grandmother was Katharina Kramb (the daughter of Jakob/Jacob Kramb/Kraab and Marie Bauer). Katharine was German, born in Ludwigshaven, Germany, c. 1937. She moved to the United States in the 1950s or in the 1960s.

Elle’s maternal grandfather was Richard Cameron “Rick” Arrington (the son of Richard Adler Arrington, Jr. and Hazel Cameron). Elle’s grandfather Richard was born in Mecklenburg County, North Carolina, and was an NFL quarterback, for the Philadelphia Eagles. Elle’s great-grandfather Richard was the son of Richard Adler Arrington and Nell/Nellie L. Covington. Hazel was the daughter of McBryde/McBride Cameron and Pearlie Thomas.