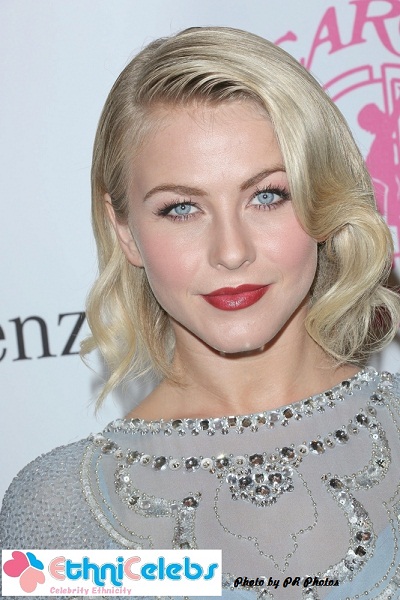 She is the sister of Derek Hough, also an actor and dancer.

Julianne is a second cousin of actor and singer Ross Lynch. Their maternal grandmothers are sisters.

Julianne’s paternal grandfather was Robert Virgil “Bob” Hough (the son of Virgil Hough and Margaret Maude “Peggy” Revert). Robert was born in Oklahoma City, Oklahoma Co., Oklahoma, and was an Idaho radio personality, known as “Bubblehead Bob” and “The Voice of North Idaho.” Julianne’s great-grandfather Virgil was the son of Thomas Hough and Eva Adella Truex. Maude was the daughter of William Perry Revert and Jessie/Jesse C. Lucas, whose father was Canadian.

Julianne’s maternal grandfather is Don Oliver Heaton (the son of Vernon Harris Heaton and Rosella/Rozella/Rosezella Cleverley/Cleverly). Don was born in Idaho, and his ancestry is English, as well as Northern Irish, Scottish, and one eighth Swedish. Vernon was the son of Jonas Sinclair Heaton and Annie/Anne Jane Harris, whose own paternal grandparents were English. Julianne’s great-grandmother Rosella was the daughter of George Franklin Cleverley/Cleverly, whose father was born in Calne, Wiltshire, England, and whose mother was born in Crookern, Somersetshire, England; and of Hannah Peterson, whose father was born in Tombäck, Blekinge, Sweden, and whose maternal grandparents were English.

Julianne’s maternal grandmother is Beth Romaine Young (the daughter of Phares Philip Young and Thelma Frandsen). Beth was born in Idaho. Phares was the son of Alfred Phillip/Philip Young and Jeanet/Janet/Jeanette Holden “Nettie” Millward, who were the children of English parents. Thelma was the daughter of Thomas Christian Frandsen, who was born in Grenaa, Randers, Denmark, and of Mary Elizabeth Haycock, whose parents were English immigrants.

Genealogy of Julianne’s father (focusing on his mother’s side) – http://worldconnect.rootsweb.ancestry.com