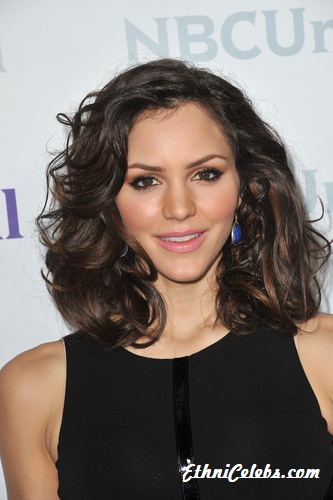 McPhee in 2012, photo by Featureflash / Shutterstock.com

Katharine McPhee is an American actress, singer, and songwriter. She was the runner-up on season five of the American reality TV series American Idol.

Katharine is the daughter of Peisha, a vocal coach, and Daniel McPhee, a television producer. She is married to Canadian musician, record producer, composer, and songwriter David Foster, with whom she has a son.

Katharine’s paternal grandfather was Roger Dexter Fee (the son of Knight Elias Fee and Minnie Belle Graves). Roger was born in Iowa. Knight was the son of George Manson Fee and Eliza Mary Dexter. Minnie was the daughter of Albert Larson Graves and Sarah Lann Nunn.

Katharine’s maternal grandfather was William Eugene “Bill” Burch (the son of Arthur Issac Burch and Nellie Jean Abrams). William was born in Washington. Arthur was the son of Nelson Hugh Burch and Nora O’Connor. Nellie was the daughter of William Lewis Abrams and Jessie Thacker. Jessie was born in Woodstock, Ontario, Canada.

Katharine’s maternal grandmother is Marian/Marion “Mimi” Meyer (the daughter of Werner Eugene Meyer and Ida M. Shepard). Marian was born in Washington. Werner, who was of German descent, was the son of George Meyer and Emma Josephine Arnto/Arntz. Ida was the daughter of Timothy Hastings Shepard and Mary Adams.

Genealogy of Katharine’s maternal great-grandmother, Ida M. Shepard (focusing on her own mother’s side) – http://worldconnect.rootsweb.ancestry.com