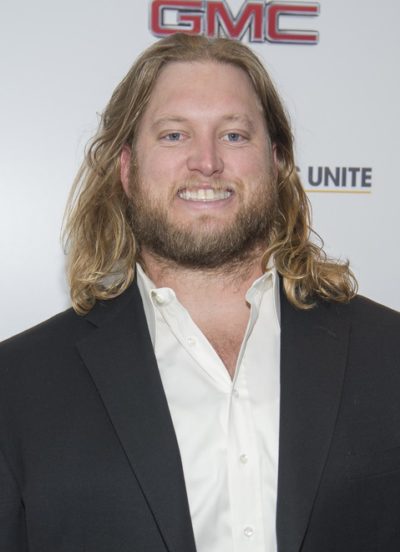 Mangold in 2014, photo by PrPhotos.com

Nick is the son of Therese and Vernon Mangold. His sister is weightlifter Holley Mangold. Nick is married to Jennifer Richmond.

Nick’s paternal grandfather was Vernon Lee Mangold (the son of Herman Leo Mangold and Grace Emnia Galvin). Vernon was born in Ohio. Herman was the son of Louis/Lewis T. Mangold, who was German, and of Agnes Robertson, who was born in England, and who may have been of part Scottish ancestry. Grace was the daughter of Kelly/Kirby Allison Galvin and Ruth Mildred Denney, who were of Irish descent.

Nick’s paternal grandmother was Catherine Henrietta Heeter (the daughter of Edward Charles Heeter and Cleopha/Cleo L. Schuck/Schock). Catherine was born in Ohio. Edward was the son of Edward Adolph Heeter, who had German ancestry, and of Anna Siekman, who was German. Cleopha was the daughter of Albert Shuck and Philomenia/Minnie A. Walters/Walter, both of whom had German parents.