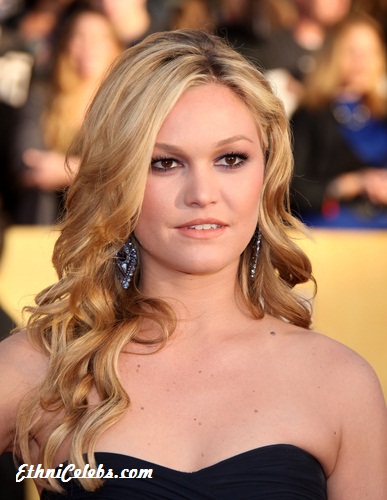 Julia Stiles is an American actress. Her roles include the films Wicked, 10 Things I Hate About You, Down to You, State and Main, Save the Last Dance, O, The Business of Strangers, The Bourne Identity, Mona Lisa Smile, The Prince & Me, Silver Linings Playbook, Out of the Dark, Hustlers, and Orphan: First Kill, and the shows Dexter, Blue, Riviera, and The Lake.

She is the daughter of Judith Newcomb Stiles and John O’Hara. She is married to camera assistant Preston J. Cook, with whom she has two children.

Julia’s maternal grandmother was Ruth “Randy” Hunsaker (the daughter of Albert Hunsaker and Dorothea/Dorothy E. Deroner). Ruth was born in New York, and had German and English ancestry. The Hunsaker and Deroner families in Pennsylvania originate in Germany. Ruth’s parents, as well as her maternal grandparents, William E. Deroner and Katie E. Seagreaves, were all born in Pennsylvania. William’s parents were Moses U. Deroner and Amanda Fink. Katie’s parents were William Hamilton Seagreaves and Annie E. Weaver.

Genealogies of Julia Stiles (focusing on her mother’s side) – http://gw.geneanet.org
http://humphrysfamilytree.com