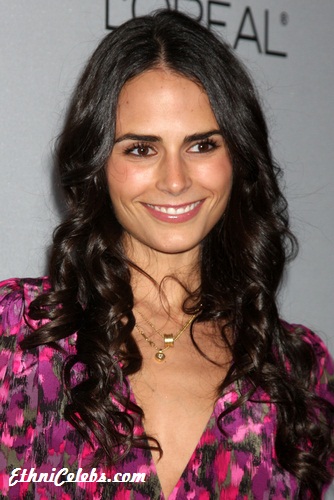 Jordana Brewster is an American actress and model. She is known for starring as Mia, the sister of Vin Diesel’s character, in the The Fast and the Furious films, and for her roles in The Faculty, Annapolis, and The Texas Chainsaw Massacre: The Beginning, among other works.

Jordana was born in Panama City, Panama, grew up in London, England and Rio de Janeiro, Brazil until the age of ten, and then moved to New York City. Her father, Alden Brewster, is American-born, and has English, and some Scottish and Irish, ancestry. Her mother, Maria João Leão de Sousa, is Brazilian, and was a Sports Illustrated cover model. She is of Portuguese ancestry. A picture of her parents can be seen here. Jordana’s grandfather, Kingman Brewster, Jr., was an educator and diplomat, who was President of Yale University and U.S. Ambassador to the U.K.

Jordana talked about her Brazilian heritage in an interview with Craig Ferguson. Jordana has two children with her former husband, producer Andrew Form. Her sister, Isabella, was married to basketball player Baron Davis.

Jordana’s paternal grandfather was Kingman Brewster, Jr. (the son of Kingman Brewster and Florence Foster Besse). Jordana’s grandfather Kingman was born in Longmeadow, Hampden, Massachusetts, and served as the 8th Provost of Yale University, from 1960 to 1963, President of Yale University, from 1963 to 1977, U.S. Ambassador to the U.K., from June 3, 1977 to February 23, 1981, and Master of University College, Oxford, from 1986 to 1988. Jordana’s great-grandfather Kingman was the son of Charles Kingman Brewster and Celina Sophia Baldwin. Florence was the daughter of Lyman Waterman Besse and Henrietta Louisa Seger/Segee, who was born in Woodstock, Carleton, New Brunswick, Canada, to American parents, from Massachusetts, her father from Wareham, Plymouth and her mother from Falmouth, Barnstable.

Sources: Genealogies of Jordana Brewster (focusing on her father’s side) – http://worldconnect.rootsweb.ancestry.com
https://www.geni.com
http://famouskin.com