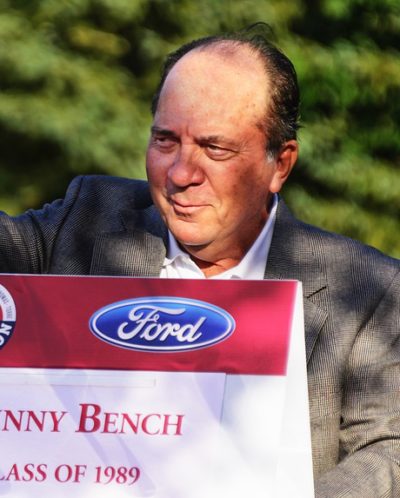 Bench in 2014, photo by elvisvaughn/Bigstock.com

Johnny Bench is an American professional baseball player. He was a catcher.

Johnny is the son of Katy and Ted Bench. He is married to Lauren Baiocchi. He has a son with his former wife, model Laura Cwikowski; and two children with Lauren. Lauren is the daughter of South African golfer Hugh Baiocchi.

Johnny’s maternal grandfather was Lonnie Edward Chaney (the son of William C. Chaney and Betty). Lonnie was born in Texas. William was the son of Benjamin Obediah Chaney and Eliza.

Johnny’s maternal grandmother was Verda Josephine Medley (the daughter of William Newton Medley and Eliza Catherine Stone). Verda was born in Oklahoma. William was the son of Damascus Allen Medley and Elvira Carr. Eliza was the daughter of Squire Franklin Stone and Martha Jane Snow.