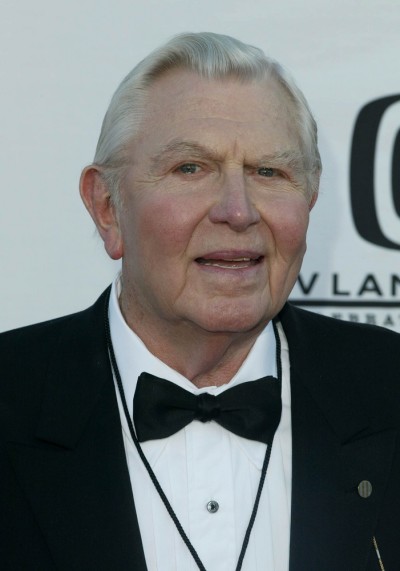 Griffith in 2004, photo by Prphotos.com

Andy Griffith was an American actor, comedian, television producer, southern gospel singer, and writer. He is known for his roles on the series The Andy Griffith Show and Matlock and in the film A Face in the Crowd.

Andy was the son of Geneva Nannie and Carl Lee Griffith. He was married to Cindi Knight, until his death. He had two children with his former wife Barbara Bray Edwards.

Andy’s paternal grandfather was John D. Griffith (the son of William Martin Griffith and Charity A. Childress). John was born in North Carolina. William was the son of Eli Griffith and Margaret. Charity was the daughter of William Childress and Fannie Vest.

Andy’s paternal grandmother was Sarah Frances Taylor (the daughter of Henry Clayton Taylor and Rebecca Ann Simmons). Sarah was born in North Carolina. Henry was the son of Thomas Taylor and Sarah E. Taylor. Rebecca was the daughter of Amos Amer Simmons and Nancy Emily Inman.

Andy’s maternal grandfather was Samuel Nunn (the son of John Nunn and Scenna Phillips). Samuel was born in Virginia. John was the son of William Nunn and Elizabeth.

Andy’s maternal grandmother was Jopina Frances Cassel (the daughter of Peter Cassel and Nancy Jane Rogers). Peter was the son of John Cassel and Mary Polly Gilbert. Nancy was the daughter of Hiram George Rogers and Elizabeth Saunders.