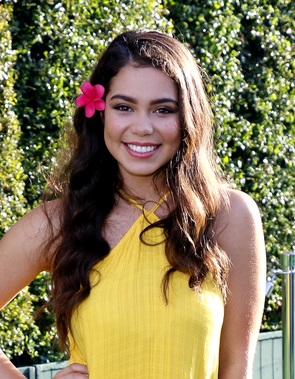 Cravalho in 2016, photo by Prphotos

Auli’i Cravalho is an American actress and singer. She voiced the title character in the 2016 Disney animated film Moana. Her ethnicity is mentioned here.

Auli’i is the daughter of Puanani and Dwayne Cravalho.

Her father is of three quarters Puerto Rican and one quarter Portuguese descent.

Her mother is of five eighths Native Hawaiian, one quarter Portuguese, 3/32 Chinese, and 1/32 Irish, ancestry.

Auli’i’s maternal grandfather was Robert Freitas (the son of Manuel Freitas and Josephine Kahiwa Ako). Robert was born in Kamalumalu, Hawaii. Manuel was the son of Portuguese emigrants, José “Joseph/Joe” Freitas and Antónia Santos, both of Madeira. Josephine was of Native Hawaiian, Chinese, and Irish descent, and was the daughter of James Kopo Ako and Margaret Makaleka Kahinano Ahana.

Genealogy of Auli’i’s mother (focusing on her own mother’s side) – https://www.genealogy.com