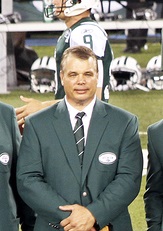 Klecko in 2010, photo by Debby Wong/Bigstock.com

Joe Klecko is an American professional football player. He was in the National Football League (NFL).

Joe is the son of Helen and Joseph Edward Klecko. He is married to Debbie, with whom he has five children, including football player Dan Klecko.