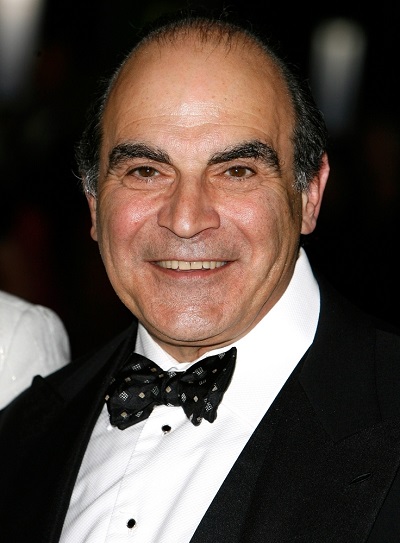 Suchet in 2016, photo by Prphotos.com

David Suchet is a British actor. He is known for his performances as Agatha Christie’s Hercule Poirot.

David is the son of actress Joan Patricia (Jarché) and gynaecologist Jack Suchet. His father was from South Africa, and emigrated to England from Johannesburg in 1932. His mother was from England. Newsreader and author John Suchet is his brother. He is married to Sheila Ferris, with whom he has two children.

David was raised without religion, but has been a practising Anglican since 1986, having been confirmed in 2006.

David’s paternal grandfather was named Isidor/Izidor Suchedowitz (the son of Yankel Shokhet/Suchedowitz and Beila). Isidor was a Lithuanian Jew, from Kretinga, Klaipėda County. Yankel was from Tryškiai.

David’s maternal grandfather was James Jarché (the son of Arnold Jarché/Jarchy and Amelie Salomon/Solomon). James was born in London, England, to a Latvian Jewish father, from Dunabourg, and a Belarusian Jewish mother, from Grodno. Arnold was the son of Lippmann Jarchy and Matilde Touroff. Amelie was the daughter of Meyer/Miles Solomon and Rebecca Levinschtein.

David’s maternal grandmother was Elsie Gladys Jezzard (the daughter of Walter Jezzard and Martha Finch). Elsie was of English descent. Walter was the son of George Jezzard and Anne.