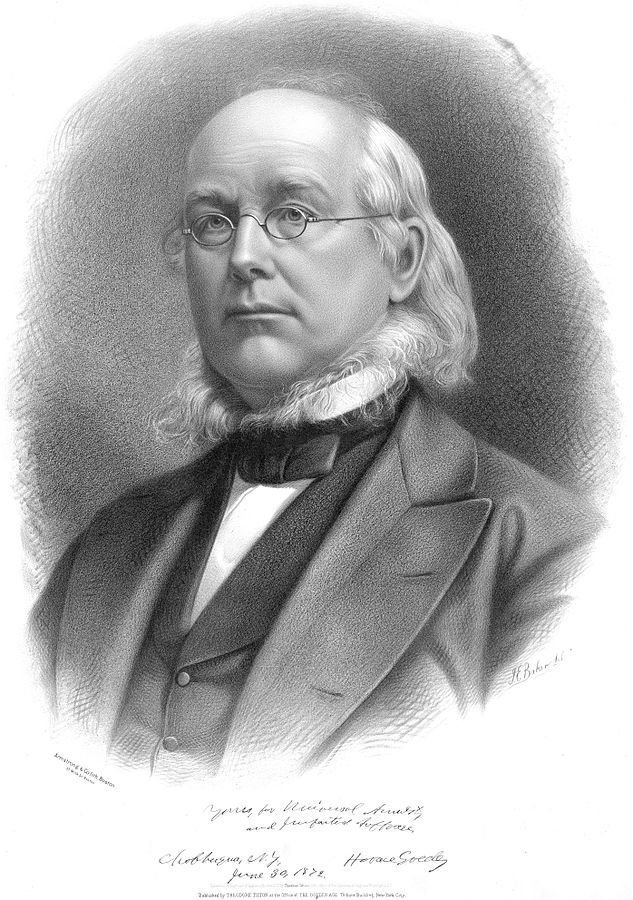 Horace Greeley was an American newspaper journalist and politician. He was the founder and editor of the New-York Tribune, then a prominent newspaper. As a Member of the Whig Party, he was a Member of the U.S. House of Representatives from New York, from December 4, 1848 to March 3, 1849.

He was the Liberal Republican Party’s nominee for President of the United States in 1872. The party’s candidates and platform were also nominated by the Democratic Party. This was the first time that two political parties nominated the same person for President in the same election. The Liberal Republican Party, founded in 1870, was dissolved in 1872.

Horace was the son of Mary (Woodburn) and Zaccheus Greeley. He was married to Mary Young Cheney Greeley, with whom he had seven children. His wife died in October 1872, while he was running for President, and Horace himself died about a month later, several weeks after he lost the election.

Horace’s paternal grandfather was Zaccheus Greeley (the son of Ezekiel Greeley and Esther Lovewell). Zaccheus was born in New Hampshire. Ezekiel was the son of Benjamin Greeley and Ruth Whittier. Esther was the daughter of Zaccheus Lovewell and Esther Hassell.

Horace’s paternal grandmother was Hester Senter (the daughter of Samuel Senter and Susan Taylor). Hester was born in New Hampshire. Samuel was the son of John Senter and Jean/Jane Foster.