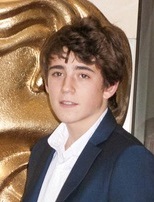 Charlie Rowe is a British actor.

Charlie is the son of Sara, a drama teacher, and Chris Rowe, an actor and writer. Charlie’s father is of three quarters British Isles [Scottish and English] and one quarter Ashkenazi Jewish [Bohemian Jewish and Austrian Jewish] descent. Charlie’s mother is of one half Scottish, one quarter Greek, and one quarter mixed English and Manx [Isle of Man] ancestry.

His aunt is actress Claire Price, who is his father’s half-sister.

Charlie’s paternal grandfather was Anthony Everard Rowe (the son of Richard Everard S. Rowe and Gretel Margarethe “Grace” Popper). Anthony was born in Johannesburg, Gauteng, South Africa. Richard was English, the son of Grace Virginia Shewan, who was born in the U.S., to Scottish parents. Charlie’s great-grandmother Gretel Popper was born in Johannseburg, to Jewish parents, Samuel Popper, from Wallischbirken, Bohemia, and Rosalie/Rosa, from Vienna, Austria.

Charlie’s maternal grandmother was Vita Despina Paparritor (the daughter of Stephen Leonidas Paparritor and Georgina Donaldson Cain). Vita was born in Athens, Attiki, Attiki, Greece. Charlie’s great-grandfather Stephen was born in Kensington, London, and was the son of Demetrius M. Paparritor and Julia Fachiri, who were Greek. Charlie’s great-grandmother Georgina was born in Douglas, Isle of Man, and was the daughter of George Frederick Cain and Alice Hartley. She had English and Isle of Man [Manx] ancestry.

Sources: Genealogy of Charlie’s paternal grandfather, Anthony Everard Rowe (focusing on his own mother’s side) – https://www.geni.com