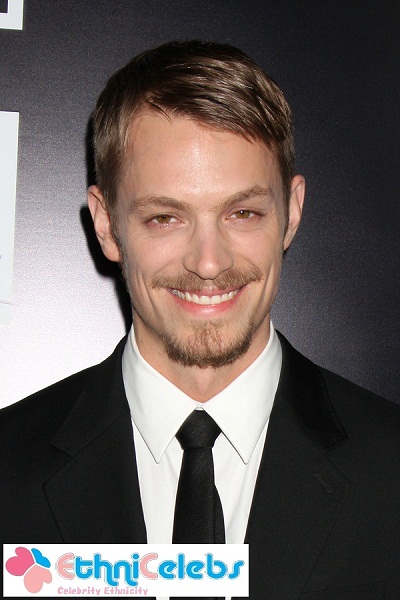 Kinnaman in 2012, image via kathclick/Bigstock.com

Joel Kinnaman is a Swedish-born actor, with dual Swedish and American citizenship. He is known for his roles in the films Easy Money, RoboCop, Suicide Squad, and The Informer, among others.

I speak English with my dad and Swedish with my mom; it’s quite schizophrenic… I always identified myself as non-Swedish. I was never discriminated against, because I looked Swedish and speak without an accent. But I had an outsider’s perspective.

Joel’s paternal grandfather was David H. Kinnaman (the son of Porter Kinnaman and Lillian Shute). David was born in Perry Township, Marion County, Indiana, to a father from Indiana and a mother from Illinois. Porter was the son of Joseph Kinnaman and Ruth P. McCoy. Lillian was the daughter of Hezekiah Shute and Laura R. McQueen.

Joel’s paternal grandmother was Rosalie Louise Mitchell (the daughter of Joseph R. Mitchell and Theoda Louise Royer). Rosalie was born in Kansas City, Kansas, to a father from Missouri and a mother from Michigan. Joseph was the son of William Wiley Mitchell and Julia Maude/Maud Finn. Theoda was the daughter of James Calvin Royer and Ida Dell Andrus.

Joel’s maternal grandmother was Rhea Rut Seiden (the daughter of Herman Seiden and Pauline Grün). Rhea was born in Stockholm. Herman was the son of Jewish emigrants, David Seiden, from Szczucin, Poland, and Hanna Heyman, from Liepāja, Latvia. Pauline was the daughter of Polish Jewish parents, Ernst Grün and Ernestina Caspar, who were from Gdańsk.

Genealogy of Joel’s paternal grandfather, David H. Kinnaman (focusing on his own father’s side) – http://www.birkenhoerdt.net

Genealogy of Joel Kinnaman (focusing on his mother’s side) – https://forum.rotter.se