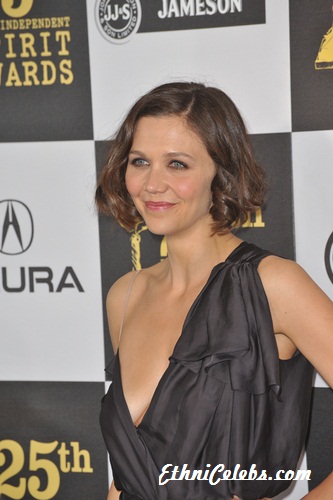 Gyllenhaal in 2010, image via Featureflash / Shutterstock.com

Maggie Gyllenhaal is an American actress. She is known for her roles in The Dark Knight, Secretary, Mona Lisa Smile, and Donnie Darko, among many other films, and for writing and directing The Lost Daughter.

She is the daughter of Stephen Gyllenhaal, a director and poet, and Naomi Foner Gyllenhaal, a screenwriter and director. Her brother is actor and film producer Jake Gyllenhaal. Maggie is married to actor Peter Sargsaard, with whom she has two children.

Maggie’s father is of one quarter Swedish ancestry, with Maggie’s father’s other roots being English, Swiss-German, German, Scottish, and distant Welsh and French. The surname Gyllenhaal originates from Sweden.

Maggie’s mother is Jewish (of Polish Jewish and Latvian Jewish descent). Maggie has said that she was raised “mostly Jewish.”

Maggie’s paternal grandfather was Hugh Anders Gyllenhaal (the son of Leonard Ephraim Gyllenhaal and Philo Pendleton). Hugh was born in Bryn Athyn, Montgomery, Pennsylvania. Leonard was the son of Anders Leonard Gyllenhaal, who was born in Klotens bruk, Ramsberg, Västmanland, Sweden, and of Selma Amanda Nelson, who was born in Chicago, Illinois, to Swedish parents. One of Leonard’s five times great-grandfathers, George Fleetwood, was English. Maggie’s great-grandmother Philo was the daughter of Charles Rittenhouse Pendleton and Sara Patterson “Sallie” Peoples/Peeples.

Maggie’s paternal grandmother was Virginia Lowrie/Lowry Childs (the daughter of Geoffrey Stafford Childs and Olivia Hughes Waelchli). Virginia was born in New York. Geoffrey was President and General Manager of the Michigan Sugar Company. He was the son of Walter Cameron Childs and Edith Worcester Smith. Olivia was born in Berlin, now Kitchener, Waterloo County, Ontario, Canada. Olivia’s father, The Rev. Frederick Edwin “Fred” Waelchli, was the son of Swiss parents, of Swiss-German descent. Olivia’s mother, Elizabeth Alena/Elena/Alma Hughes, was from Ontario, Canada, and had English, German, and distant Welsh, ancestry. Most of the rest of Maggie’s father’s ancestry is English, with distant French.

Maggie’s maternal grandfather was Samuel Achs (the son of Morris L. Achs and Etty/Ety/Etta Schneir). Samuel was born in New York, to Polish Jewish parents, from Galicia. Morris was born in Kolomea.

Maggie’s maternal grandmother was Ruth Silbowitz (the daughter of Benjamin Silbowitz and Yetta Schklar/Sklar). Ruth was born in New York, to Latvian Jewish parents. Benjamin was born in Dvinsk, the son of Chaim Nosson/Nathan Zelbowitz and Fruma Gore. Yetta was the daughter of Jackob Schklar and Seroh Domge. Maggie likely shares a recent ancestor with actor Logan Lerman through Maggie’s Silbowitz line; his ancestors were listed on the same Zelbovitz family site as Logan’s Zelbovitz line.

A DNA test on the show Finding Your Roots with Henry Louis Gates, Jr. (2019) found that she has a common ancestor with comedian and actress Sarah Silverman.