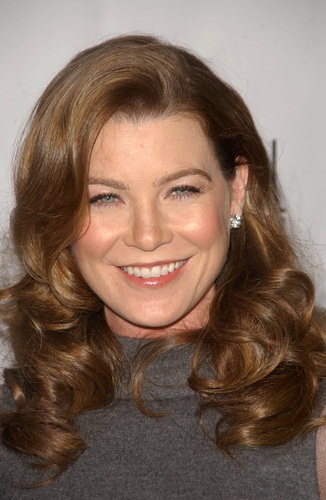 Pompeo in 2007, photo by s_bukley / Shutterstock.com

Ellen Pompeo is an American actress and producer. She is known for starring on the ABC series Grey’s Anatomy, as Meredith Grey.

Ellen’s paternal grandfather was Angelo Pompeo (the son of Giuseppe/Joseph Pompeo and Isabella/Isabel Dellerario). Angelo was Italian, from Gesualdo, Province of Avellino, Campania, Italy. Giuseppe was the son of Angelo Pompeo and Maria Annunzianta Bettalico. Isabella was the daughter of Ciriaco Dellerario and Maria Rosa DiNisco.

Ellen’s paternal grandmother was Marie J. Burnham (the daughter of Horace Edward Burnham and Honora Frances Elizabeth Dawson). Horace was the son of Frederick/Fredrick William Burnham and Jennie A. McKay/McCabe, who was born in Massachusetts, to Canadian parents, and was of at least part Scottish descent. Honora was born in Massachusetts, the daughter of Irish parents, Frances/Francis/Frank C. Dawson and Ellen J. Lynch.

Ellen’s maternal grandfather was Dennis Francis O’Keefe (the son of William Francis/I. O’Keefe and Ellen Bridget “Nellie” Twomey). William was born in Ireland, and was the son of Dennis O’Keefe, from Cork, and of Mary Coffey. Ellen’s great-grandmother Ellen Twomey was also Irish, and was the daughter of Hugh Twomey and Margaret McCarthy.

Genealogy of Ellen Pompeo (focusing on her mother’s side) – http://familytreemaker.genealogy.com