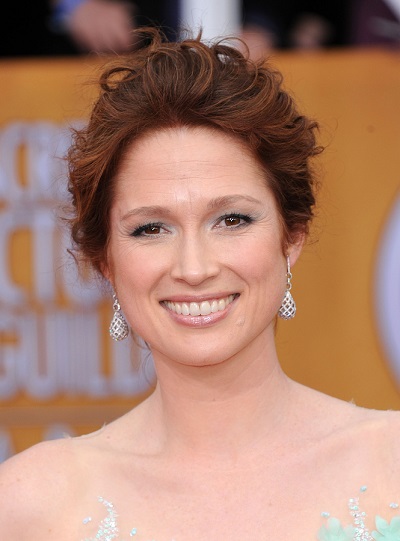 Kemper in 2013, photo by DFree/Bigstock.com

She is the daughter of Dorothy Ann “Dotty” (Jannarone) and David Woods Kemper. She comes from a prominent Missouri family, which founded what is today Commerce Bancshares, a bank holding company, of which her father was chairman and chief executive officer. Ellie is the sister of television writer Carrie Kemper. She is a practicing Catholic.

Ellie is married to writer, comedian, and producer Michael Koman, with whom she has two children.

Ellie’s paternal grandfather was James Madison Kemper, Jr. (the son of James Madison Kemper and Gladys Woods Grissom). Ellie’s grandfather James was born in Missouri. Ellie’s great-grandfather James was the son of William Thornton Kemper, Sr., a prominent banker, insurance agent, and railroad magnate, who was the first president of Commerce Bank; and of Charlotte “Lottie” Crosby, whose own parents were from Maine. Ellie’s great-grandmother Gladys was the daughter of Arthur Grissom and Julia Stone Woods.

Ellie’s paternal grandmother was Mildred Lane Kemper (born Mildred Lane, the daughter of Eldon Russell Lane and Ethel J. Miller). Mildred was born in Missouri, and is a philanthropist, after whom the Mildred Lane Kemper Art Museum at Washington University in St. Louis is named. Eldon was the son of Robert Crump/Carr Lane and Laura D. Brennan, whose father was Irish. Ethel was born in Illinois, the daughter of a Danish father, Rudolph Christian Miller/Møller, and of a German mother, Wilhelmina Caroline Augusta Daugs.

Ellie’s maternal grandfather was John Robert Jannarone (the son of Charles Jannarone and Concetta Caruso). John was born in New Jersey, and was a Brigadier General. His parents were Italian, with his own father being from Avellino, Campania. Charles was the son of Joseph Jannarone and Mary Grace Difuria. Concetta was the daughter of Francisco/Francesco/Frank Caruso and Nicoletta Falcone.

Genealogy of Ellie Kemper (focusing on her father’s side) – https://www.geni.com