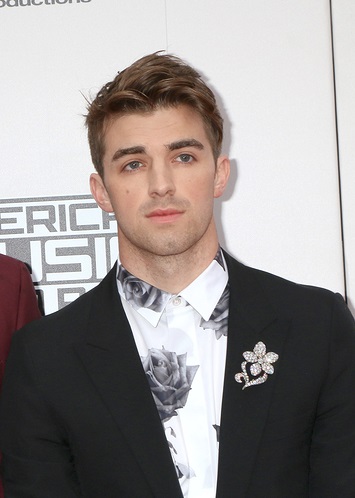 Taggart in 2016, photo by kathclick/www.bigstockphoto.com

Andrew Taggart is an American musician. He is part of the duo The Chainsmokers, along with Alex Pall. He was raised in Freeport, Maine.

Andrew’s maternal grandfather was Leo Albert Girr (the son of Francis Xavier Girr and Kathryn P. Curry). Leo Girr was born in Rhode Island, and had a prominent sports memorabilia store, Sports Central; a radio and television show, Sports Roundtable; and he wrote the book Media Baseball Bible. Francis was the son of James A. Girr, who was born in France, likely of ethnic German descent, and of Johanna/Joanna Dillon. Kathryn was the daughter of Michael J. Taggart and Lucy Hurton.

Andrew’s maternal grandmother was Margaret “Peggy” Ballard (the daughter of Edwin Craven Ballard, Sr. and Margaret Connery Dwyer). Peggy was born in Providence, Rhode Island. Edwin was the son of George Allan Ballard, whose father was from Dublin, Ireland, and whose mother was born in Québec, Canada, to Irish parents; and of Elizabeth Agnes McCaffrey, whose own parents were from Cavan, Ireland. Andrew’s great-grandmother Margaret was the daughter of Timothy Francis Dwyer and Helena Maria Connery, who were also of Irish descent.