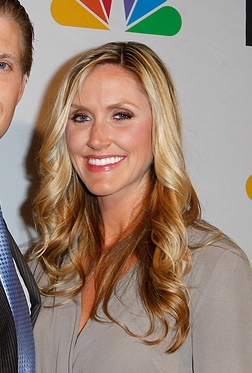 Trump in 2012, photo by Debby Wong/Bigstock.com

Lara Trump is an American journalist and associate producer. She worked at the CBS television news program Inside Edition. Lara is the daughter of Linda and Robert Yunaska.

Lara is married to businessperson and philanthropist Eric Trump, who is the son of Ivana Trump (born Ivana Marie Zelníčková), a model, and Donald Trump, a businessperson, television personality, and the 45th President of the United States. Lara and Eric have two children.

The couple [Eric and Lara Trump], who have been together for six years, wed under a crystal-embellished chuppa in a ceremony officiated by Ivanka Trump’s husband, Jared Kushner.

This was interpreted by some, including the Jewish magazine Tablet, as meaning that the wedding was Jewish, and other sources therefore reported that Lara is Jewish. This is not accurate (Lara is not Jewish).

Lara’s maternal grandfather was Herman Leroy Sykes (the son of James Mordicae Sykes and Minnie Clewis/Clewes). James was the son of Chas Sikes and Margarett Emirs. Minnie was the daughter of Richard L. Clewis/Clewes and Martha Jane Oliver.