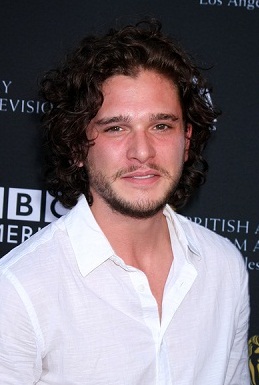 Harington in 2011, image via kathclick/Bigstock.com

Kit Harington is an English actor. His roles include Game of Thrones, Silent Hill: Revelation, Pompeii, and Testament of Youth. He is the son of Deborah Jane (Catesby), a playwright, and Sir David Richard Harington, 15th Baronet, a businessperson. Kit is married to Scottish actress Rose Leslie, with whom he has a son.

He was named after playwright Christopher Marlowe, whose first name had also been shortened to Kit.

Kit’s father is from a prominent family, with the Haringtons deriving their name from their estate, a lordship in Cumberland. His genealogy includes many Earls, Dukes, Baronets, Peers, and Viscounts, as well as Kit’s paternal eight times great-grandfather, Charles II of England (1630-1685), who was King of England, Scotland, and Ireland, from 1660 to 1685, and King of Scotland, from 1649 to 1651. Among Kit’s other ancestors are bacon merchant T. A. Denny, clergyman Baptist Wriothesley Noel, and Henry Dundas, 1st Viscount Melville, who was a Scottish advocate and Tory politician. Many of Kit’s mother’s ancestors lived in India and South Africa as part of colonialism/European settlements.

Most of Kit’s ancestry is English, along with some Scottish, Northern Irish, Welsh, and Dutch, roots. As well, one of his great-great-great-great-great-grandmothers, Rafaela del Gardo, was Spanish, born in Minorca, one of the Balearic Islands of Spain. If both of Rafaela’s parents were Spanish, that would make Kit of 1/128th Spanish ancestry. Kit also has distant German, Jersey Channel Islander, and French, ancestry.

Through his descent from Charles II, Kit is a distant cousin of Australian actor Dacre Montgomery, and of Kit’s wife Rose Leslie, who are also descended from Charles II.

Kit’s paternal grandmother was Lavender Cecilia Denny (the daughter of Ernest Wriothesley Denny and Lois Marjorie Legge). Lavender was born in Toronto, Ontario, Canada, to English parents. Ernest was the son of Thomas Anthony Denny, who was born in Ireland; and of Mary Jane Noel, whose father was born in Leith, Scotland, of the Noel Baronets, and whose mother descended from the Lord Dochfour. Lois was the daughter of Edward Henry Legge, who descended from the Earls of Dartmouth, the Earls of Aylesford, the Dukes of Somerset, and the Viscounts Barrington; and of Cordelia Twysden Molesworth, who descended from the Molesworth-St. Aubyn Baronets, the Trelawny Baronets, and the Twysden Baronets.

Kit’s maternal grandmother was Philippa Mary Evans (the daughter of Thomas Charles Cann Evans and Isabella/Isabelle/Isabel Dorothy Joyce Dennys). Philippa was born in Kensington, London, England. Kit’s great-grandfather Thomas, who was born in St Thomas, Devon, England, was the son of Thomas George Cann Evans and Mary Bond, and was a Major in the Royal Australian Army Medical Corps.

Kit’s great-grandmother Isabelle was an artist, known professionally as Joyce Dennys. Isabelle was born in Murree, India, now Pakistan, and had Dutch, Scottish, German, English, and distant French, ancestry. She was the daughter of Charles John Dennys and Lucy Winewood Tulloch, who herself was born at sea, to a Scottish-born father and an Indian-born mother. Biographical material on Isabelle, as well as two pictures, can be found here.

Genealogies of Kit Harington (focusing on his father’s side) – http://thepeerage.com
http://www.wikitree.com

Genealogy of Kit Harington (focusing on his father’s side) – http://worldconnect.rootsweb.ancestry.com