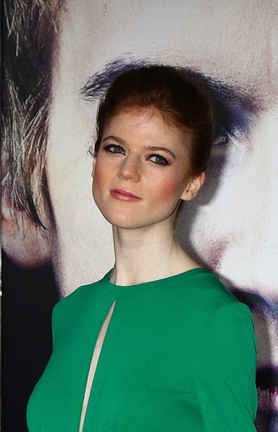 Leslie in 2013, photo by kathclick/Bigstock.com

Rose Leslie is a Scottish actress. She is known for her roles on the series Game of Thrones and Downton Abbey.

Rose is the daughter of Candida Mary Sibyl (Weld) and Sebastian Arbuthnot-Leslie, who is the Aberdeenshire Chieftain of Clan Leslie. She is the third of five children. Rose is married to English actor Kit Harington, with whom she has a son.

Rose’s maternal grandmother was Frances Mary Fraser (the daughter of Alastair Thomas Joseph Fraser and Sybil Grimston). Alastair was the son of Simon Fraser, 13th Baron Lovat, and of Alice Mary Weld-Blundell. Sybil was the daughter of James Walter Grimston, 3rd Earl of Verulam, and of Margaret Frances (Graham) Grimston, Countess of Verulam.

Though her descent from Charles II, Rose is a distant cousin of Australian actor Dacre Montgomery, and of her husband Kit Harington, who are also descended from Charles II.

Leslie grew up in Lickleyhead Castle, before moving to England for school. Rose’s great-grandfather William Douglas Arbuthnot Leslie was a descendant of the original Leiths of Lickleyhead, and Rose’s father owns the castle. Her family also own Warthill Castle in Abeerdenshire.