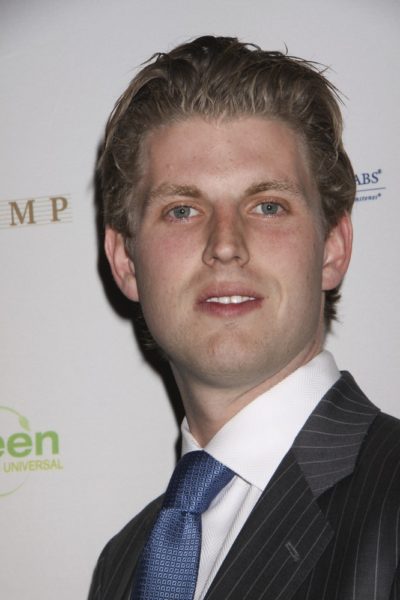 His paternal grandfather, Fred Trump, was a prominent real estate developer. His father, born in Queens, is of half German and half Scottish descent. His mother, born in Gottwaldov, Moravia, was Czech. His siblings are Donald Trump, Jr. and Ivanka Trump, who work in business, and his half-siblings are Tiffany Trump and Barron Trump. Eric’s aunt (his father’s sister), Maryanne Trump Barry, is a prominent judge. Eric’s great-uncle (his paternal grandfather’s brother) was John G. Trump (John George Trump), an electrical engineer, inventor, and physicist.

Eric is married to Lara Trump (born Lara Yunaska), an associate producer in TV. The couple has two children.

While it is sometimes stated that Eric’s great-grandfather was born under the surname Drumpf, this is not accurate. The family surname was simply Trump going back at least several generations.

Eric’s patrilineal line traces to Johann Paul Trump, who was born, c. 1727, and was from Bobenheim am Berg.

Eric’s paternal grandfather was Frederick Christ Trump (the son of Frederick/Friedrich/Friederich Trump and Elizabeth/Elisabeth/Elisabetha Christ). Eric’s grandfather Frederick was born in Woodhaven, Queens, New York, to German parents, from Kallstadt, Rhineland-Palatinate. Eric’s great-grandfather Friedrich was the son of Johannes Trump and Katharina/Katerina/Katherina Kober, who was born in Augsburg, Bavaria. Elizabeth was the daughter of Philipp Christ and Anna Maria/Marie Anthon.

Eric’s paternal grandmother was Mary Anne MacLeod (the daughter of Malcolm/Calum MacLeod and Mary Smith). Eric’s grandmother Mary Anne was Scottish, born in Tong, Stornoway, on the Isle of Lewis. She came to the U.S. around 1929, at the age of seventeen, and worked as a maid in New York. She became a U.S. citizen in 1942. Malcolm was the son of Alexander MacLeod and Ann/Anne/Annie MacLeod. Eric’s great-grandmother Mary was the daughter of Donald Smith and Mary Macaulay/Macauley.

Eric’s maternal grandmother was Marie/Maria Francová (the daughter of Václav Franc and Anna Procinger). Marie was born in Velké Pavlovice/Groß Pawlowitz, Břeclav, Moravia. Václav was the son of Martin Franc and Magdalena Bradová. Anna was the daughter of Josef Pocingr and Marie Hládková. Ivana had said that her mother Marie was Austrian. This does not appear to have been accurate.

Genealogy of Eric Trump (focusing on his father’s side) – http://wc.rootsweb.ancestry.com

Genealogy of Eric’s father (focusing on his own father’s side) – http://www.wargs.com

Information about some of Eric’s Scottish ancestors – http://www.scotlandspeople.gov.uk