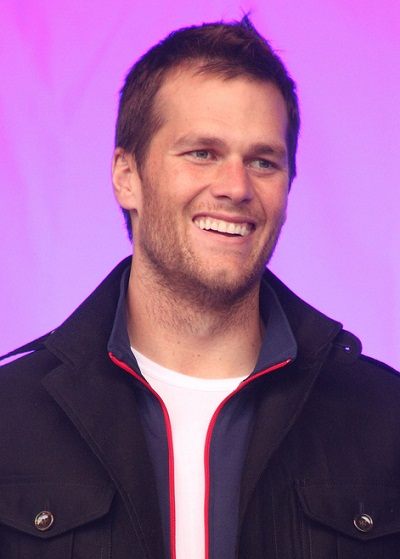 Tom is the son of Galynn Ann (Johnson) and Thomas Edward Brady. His father is of Irish, and a small amount of English, descent. His mother is of approximately one quarter Swedish, one quarter Norwegian, three eighths Polish, and one eighth German, descent. Tom is married to Brazilian model Gisele Bündchen. Tom has a son with his former partner, actress Bridget Moynahan; and two children with Gisele. His brother-in-law is baseball player Kevin Youkilis, who is married to Tom’s sister, Julie.

Tom’s paternal grandfather was Harry Christopher Brady (the son of Philip F. Brady and Ellen/Nellie G. Donahue). Harry was born in San Francisco, California. Philip was born in Massachusetts, to Irish parents, John Brady, from County Monaghan, and Bridget Bailey/Bayley. They left Ireland because of the Great Famine, and moved to Boston, and then San Francisco. Tom’s first cousin, three times removed, was Major League Baseball player “Steady” Pete Meegan, who was the son of Ann, Bridget’s sister. Tom’s great-grandmother Ellen was born in California, the daughter of Dennis Donahue, who was from County Derry, Ireland, and of Margaret Devenney, who also had roots in Derry.

Tom’s maternal grandfather was Gordon Emanuel Johnson (the son of Arthur W. Johnson and Rena Lund). Gordon was born in Browerville, Todd, Minnesota. Arthur was born in Minnesota, to Swedish parents, Isaac Johnson and Martha. Rena was born in Norway.

Tom’s maternal grandmother was Bernice Theresa Obitz (the daughter of Charles John Obitz/Opitz and Anna M. Stish). Bernice was born in Todd County, Minnesota. Charles was born in Minnesota, the son of Wilhelm/William Opitz/Obitz, who was an ethnic German, and of Maria/Mary Ulke, who was Polish. Anna was born in Ashton, Sherman, Nebraska, of Polish descent, the daughter of Peter J. Stish, from Opole, and of Nancy/Nancie/Nartazzice Kowschliski, who herself was the daughter of Julius Kowschliski and Rosalin Kanopikofek.