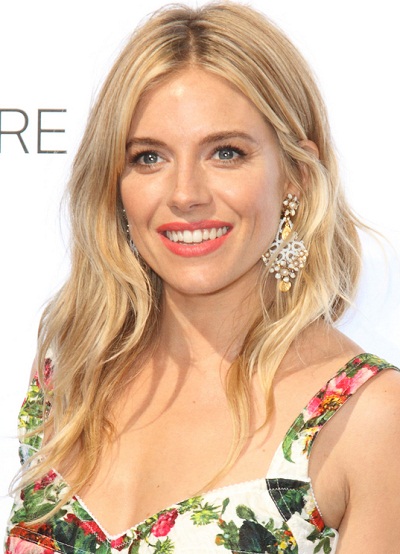 Miller in 2013, photo by PrPhotos.com

Sienna Miller is an American-born British actress, model, and fashion designer. Her roles include Factory Girl, Stardust, G.I. Joe: The Rise of Cobra, and American Sniper.

Sienna was born in New York City, New York, and raised in London, England. Her father, Edwin Miller, is American-born, and from Pittsburgh. Her mother, Josephine or Jo, is South African-born. Her sister is fashion designer Savannah Miller. Her former stepmother is interior designer and author Kelly Hoppen.

Sienna has a daughter with her former partner, English actor Tom Sturridge.

Sienna’s paternal grandfather was Dr. Charles Spurgeon Miller (the son of Calvin H Miller and Mary Minerva Mohney). Charles was born in Pennsylvania or Ohio, and was of German descent. Calvin was the son of Jacob R. Miller and Elizabeth Schaffer/Schrader. Mary was the daughter of Benjamin Mohney and Sarah Miller.

Sienna’s paternal grandmother was Evelyn Louise Layng (the daughter of Frank Rawn Shunk Layng and Belle Kennedy Chase). Evelyn was born in Pennsylvania. Frank was the son of Frank R. Layng, who was born in Pennsylvania, to Irish parents, and of Estelle Emma Tower, who was of English, German, and Scottish descent. Belle was the daughter of Gorton Benjamin Chase and Eveline Mary Kennedy.