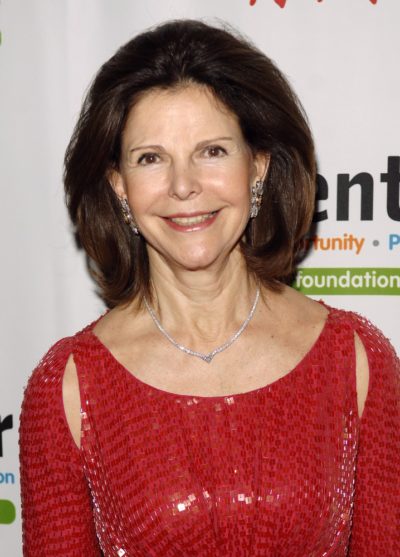 Queen Silvia of Sweden in 2008, photo by Prphotos

Queen Silvia of Sweden is a Swedish royal. She is married to Carl XVI Gustaf, King of Sweden. Among their children is Victoria, Crown Princess of Sweden.

Queen Silvia is the daughter of Alice (Soares de Toledo) and Carl August Walther Sommerlath. Her father was German. He was a businessperson, who was a member of the Nazi Party. Her mother was Brazilian, of mostly Portuguese descent. Some of Queen Silvia’s distant ancestors were Spanish immigrants. Her ancestor, Felippe/Felipe de Campos Branderborg/Vanderburg, who was born, c. 1618, was an emigrant from Portugal, and was the son of Felipe/Francisco van der Borg/van den Berg, who was Belgian (Flemish). Queen Silvia is also descended from Izabel/Isabel Diaz (also known as Bartira/Burtira/Bartyra and Mbicy), an Indigenous Brazilian who married Portuguese explorer João Ramalho, who likely had Sephardi Jewish ancestry. She was the daughter of Indigenous chief Tibiriçá (baptized Martim Afonso/Affonso de Sousa by Portuguese missionaries), leader of the Tupiniquim tribe in the village Inhapuambuçu, and of his wife Potira, also an Indigenous Brazilian. Queen Silvia has other Indigenous Brazilian ancestors, including Tibiriçá’s brother Piquerobi.