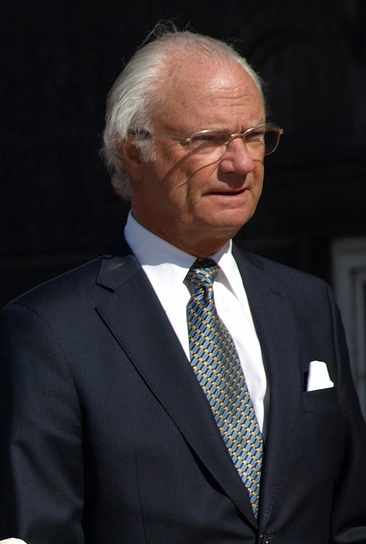 Carl XVI Gustaf has been King of Sweden, since 15 September, 1973. He is of the house Bernadotte. King Carl is the son of Prince Gustaf Adolf, Duke of Västerbotten (Gustaf Adolf Oscar Fredrik Arthur Edmund) and Princess Sibylla of Saxe-Coburg and Gotha (Sibylla Calma Maria Alice Bathildis Feodora). His father was born at Stockholm Palace, Stockholm, Sweden. His mother was born at Friedenstein Palace, Gotha, Duchy of Saxe-Coburg and Gotha, German Empire. His grandfather, great-grandfather, and great-great-grandfather were Kings of Sweden.

Carl Gustaf is married to Queen Silvia of Sweden. Among their three children is Victoria, Crown Princess of Sweden.

King Carl’s paternal grandfather was Gustaf VI Adolf Oscar Fredrik Wilhelm Olaf Bernadotte (the son of Gustaf V Bernadotte, and of Sophie Marie Viktoria von Baden). King Carl’s grandfather Gustaf VI Adolf was born at Stockholm Palace, Stockholm, Sweden, and was King of Sweden, from 29 October, 1950 to 15 September, 1973. King Carl’s great-grandfather Gustaf V was King of Sweden, from 8 December, 1907 to 29 October, 1950. He was the son of Oscar II Fredrik Bernadotte, who was King of Sweden, from 18 September, 1872 to 8 December, 1907, and King of Norway, from 18 September, 1872 to 26 October, 1905; and of Sofia Vilhelmina Mariana Henrietta von Nassau-Württemberg. King Carl’s great-grandmother Sophie was the daughter of Fredrichk I Wilhelm Ludwig of Baden, and of Luise Marie Elisabeth von Preußen.