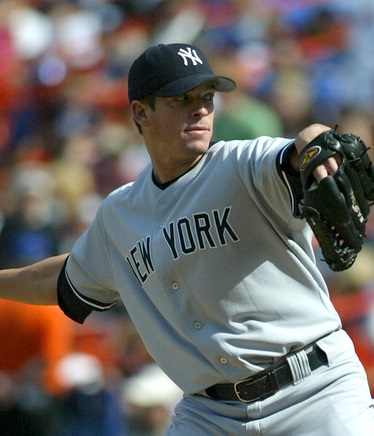 Mussina in 2006, photo by Anthony Correia/Bigstock.com

Mike Mussina is an American baseball player. He is a starting pitcher. He has played 18 seasons in Major League Baseball (MLB). In 2019, he was elected to the Baseball Hall of Fame.

Mike is the son of Eleanor and Malcolm Mussina. He is married to Jana McKissick, with whom he has three children.

Mike’s patrilineal line can be traced to his great-great-great-great-grandfather Jacob Lyons Mussina, who was born, c. 1769, evidently in Kratierski/Kralershire, Poland. Jacob is often believed to have been Jewish, and the son of a rabbi. In the United States, Jacob married Mike’s four times great-grandmother Barbara Noss/Nass, who was of Pennsylvania Dutch (German) descent, the daughter of a father from Auf dem Würtenberg, Gladenbach, Hesse.

Mike’s paternal grandmother was Florence Grace Spencer (the daughter of John Carroll Spencer and Jessie Grace Chadwick). John was the son of Harry Edward Spencer and Clara Belle White. Jessie was the daughter of William Perry Chadwick and Lovina Peelle.

Mike’s maternal grandfather was Millard Alvin Cole (the son of Russell Bryon Cole and Nellie Miller). Russell was the son of Ezra L. Cole and Sarah Elizabeth Stiner. Nellie was the daughter of Lewis Miller, Sr. and Maude May Galbraith.