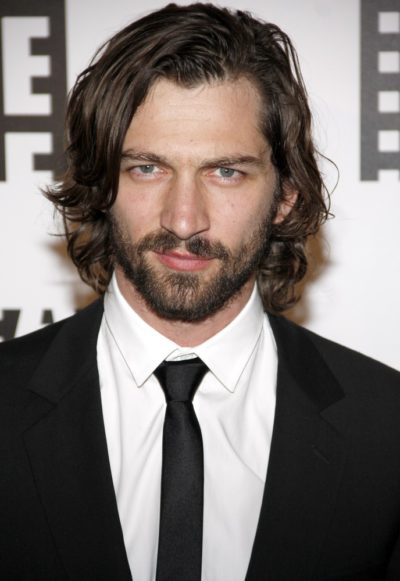 Huisman in 2014, photo by Prphotos

Michiel Huisman a Dutch actor, musician, singer, and songwriter. He has starred in both Dutch- and English-language television series and films. His television roles include Game of Thrones, Orphan Black, Nashville, Treme, and The Haunting of Hill House. He has co-starred in the films The Age of Adaline and The Red Sea Diving Resort, among others.

Michiel is the son of Miryam and Dick Huisman. His brother is professional footballer Dustin Huisman. Michiel is married to actress Tara Elders, with whom he has a daughter.

Michiel’s mother is Ashkenazi Jewish, from a family with deep roots in the Netherlands, going back to the 1600s, as well as ancestors that lived in Germany, the Czech lands, Poland/Ukraine, and, more distantly, Alsatia/France. It is not clear if Michiel’s father is Jewish, too, but it is possible.

Michiel’s brother Dustin has said, “I am Jewish as far as faith is concerned. Friday is therefore a real family day.”

Michiel’s maternal grandfather was Jacques Simon “Jack” Bles (the son of Bernard Bles and Rachel Reens). Jacques was born in Amsterdam, North Holland, Netherlands, to a Jewish family. Bernard was the son of Joseph Bles and Duifje Furth. Rachel was the daughter of Jacob Levie Reens and Mietje Halverstad/Halberstad. Michiel’s great-grandmother Rachel was killed in the Holocaust in 1944.

Michiel’s maternal grandmother was Ernestine Bartfeld (the daughter of Max Bartfeld/Bartfield and Klara Chaya Weiser). Ernestine was born in Zwickau, Germany, the daughter of Jewish parents from Saxony, Germany. Max was born in Leipzig, Leipzig, the son of Moses/Moritz Bartfeld, from Krasna, Ukraine, and of Ernestine Stoll, from Massbach. Klara was born in Zwickau, Chemnitz, the daughter of Leib/Leo Weiser, from Buczacz, Poland, and of Ella Skall, from Chemnitz. Ella also had roots in Chomutov, Usti nad Labem, Czech Republic. Ella’s mother, Michiel’s great-great-great-grandmother Cäcilia Hirsch, was killed in the Holocaust, in 1942, in Auschwitz.

Sources: Genealogies of Michiel Huisman (focusing on his mother’s side) – https://gw.geneanet.org
https://www.geni.com
http://jorge.home.xs4all.nl