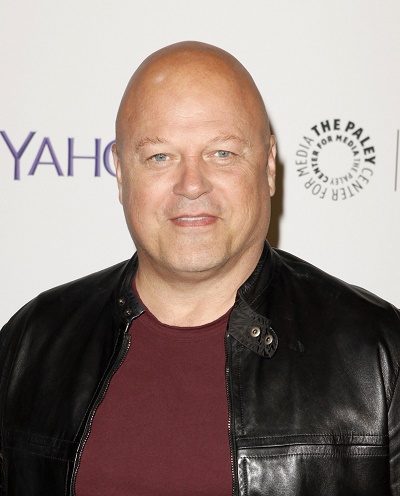 Chiklis in 2015, photo by Prphotos

Michael Chiklis is an American actor, director, and producer. His roles include the series The Shield, The Commish, and No Ordinary Family, and the films Fantastic Four, Eagle Eye, When the Game Stands Tall, Hubie Halloween, and Wired (1989), as John Belushi.

Michael is the son of Katherine, a hospital administrative aide, and Charlie Chiklis, who ran a hair and beauty salon. His father is of Greek descent. His mother is of one half Greek, one quarter Irish, and one quarter English, ancestry. Michael was raised in Andover, Massachusetts.

Michael is married to Michelle Moran, with whom he has two children.

Michael’s paternal grandfather was Peter Charles Chiklis (the son of Costas/Charles Chiklis and Calliope/Kaliope/Caliopy G. Eliopoulos). Peter was born in New Hampshire, to Greek parents. Costas was the son of George A. Chiklis and Angela P. Demake. Calliope was the daughter of John Eliopoulou and Georgia P. Malavazore.

Michael’s paternal grandmother was Nellie Sarakos (the daughter of Nicholas Sarakos and Maria/Mary Koutroubis). Nellie was born in Massachusetts, to Greek parents. Nicholas was the son of John Sarakos and Panagiota Zgagika. Maria was the daughter of George Koutroubis and Elene Koliopoulos.

Genealogy of Michael’s maternal great-great-grandfather, Albert Deane Grover (focusing on his own mother’s side) – http://worldconnect.rootsweb.ancestry.com