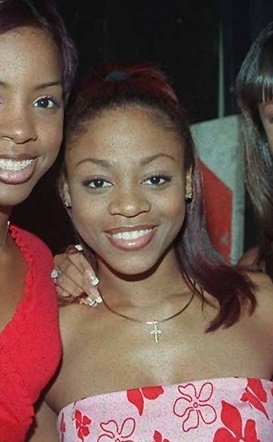 Roberson in 1999, photo by Prphotos.com

LaTavia Roberson is an American singer, songwriter, and actress. She rose to fame in the late 1990s as an original member of the R&B group Destiny’s Child, along with Beyoncé, Kelly Rowland and LeToya Luckett. She is the daughter of Cheryl Marie (Lastrap) and Terry Glenn Roberson. LaTavia has mentioned that her mother is of Creole descent.

She has two children with record producer Don Vito.

LaTavia’s maternal grandfather is named Whitney John Lastrap (who is possibly the son of Sidney Lastrap and Marion Briscoe).

LaTavia’s maternal grandmother was Agnes Jane Goodie (the daughter of Milton Goodie and Yvonne Duges/Dugas). Milton was the son of Clodis Goodie and Leah Mire. Yvonne was the daughter of Aristide/Oristile Dugas and Marie Charlotte Neveu/Navey.