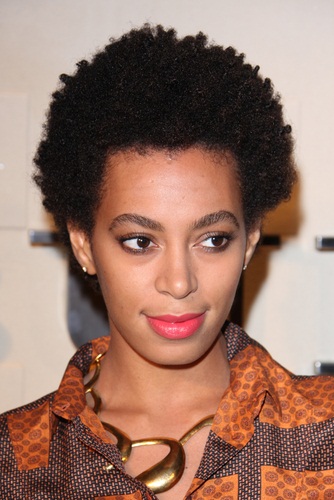 Solange Knowles is an American actress, singer, songwriter, and model. She is the daughter of Tina Knowles (born Célestine Ann Beyincé), a fashion designer, and Mathew C. Knowles, a businessperson and talent manager. She is the sister of actress and singer Beyoncé. They are the first sisters to have each had No. 1 albums. Solange is a step-sister of actress Bianca Lawson. Her mother is married to Bianca’s father, actor Richard Lawson. Solange is married to music video director Alan Ferguson. She has a son with her former husband, Daniel Smith.

Solange’s father is African-American. Solange’s maternal grandparents were French-speaking Louisiana Creoles, with roots in New Iberia; their ancestry was mostly African and French (including French ancestors who lived in Canada). Through her mother’s line, Solange is a great-great-great-great-great-great-granddaughter of Acadian leader Joseph Broussard, and a descendant of Jean-Vincent d’Abbadie de Saint-Castin (born c. 1652), and of his wife, Marie Mathilde Pidianske/Penobscot (born c. 1658), who was the daughter of Madockawando Abenaki, a chief of the Penobscot (Panawahpskek) people. Through Marie Mathilde, Solange is of 1/1024 Indigenous descent. Solange is also of approximately 1/32 Irish ancestry, and has distant Breton roots on her mother’s side, as well. Her sister’s name, Beyoncé, is a tribute to their mother’s maiden name Beyincé. Through her Broussard line, she is a third cousin of gospel singer and graphic artist Karen Showell.

Solange’s sister Beyoncé has said that she has Nigerian ancestry. She may have discovered this through a DNA test.

Solange’s mother has also been described as having Cherokee and/or Choctaw Native American ancestry. It is not clear if this ancestry has been verified/documented. No Cherokee Native American ancestors appear on publicly available family trees of Solange’s mother. One book biography of Solange’s sister, Crazy in Love: The Beyoncé Knowles Biography, from 2000, also refers to their mother having Spanish, Jewish, Chinese, and Indonesian ancestry. It is also not clear if this is accurate.

A picture of Solange’s maternal grandparents can be seen here.

Solange’s paternal grandfather was Matthew/Mathew Q. Knowles (the son of Taylor Knowles and Girlie/Gurlie/Gerlie Mae Miller). Matthew was born in Alabama. Taylor was the son of James Isaac Knowles and Sarah Elizabeth Dixon. Girlie was the daughter of Prophet Miller and Jane Hall.

Solange’s paternal grandmother is Lou Helen Hogue (the daughter of Davis/Dave Hogue and Hester Moore). Lou was born in Alabama. Davis was the son of Jim Hogue and Rosetta Moore. Hester was the daughter of Pinkney Madison Moore and Arenia Goree.

Solange’s maternal grandfather was Lumis Albert Beyincé/Buyincé (the son of Alexandre/Alexon Beyincé/Buyincé and Marie/Mary Amelie Oliver/Olevia/Olivier Broussard). Lumis was born in Delcambre, Vermilion, Louisiana. Alexandre was the son of Jean Boyancé/Beyincé, who was born in France, and of Angéline Élizabeth Green. Marie Amelie was the daughter of Olivier Despanet Broussard and Alphonsine Boutte.

Solange’s maternal grandmother was Agnès/Agnèz DeRouen/Deréon (the daughter of Eugène-Gustave DeRouen/Deréon/Derezen and Odelia Broussard). Agnès was born in Decambre, Louisiana, and was a prominent seamstress. Eugène-Gustave likely was the son of Eloi Jacques DeRouen. Odelia was the daughter of Éloi/Éloy-René Rosemond Broussard, who was white, of French descent, and of Celestine Joséphine Lessee/Lesse/Lesser/Lacy/Lacey, who was black/mixed-race black, and the daughter of a slave mother. Éloi and Joséphine had many children together, and possibly married. A picture of Solange’s great-grandfather Eugène-Gustave can be seen here.