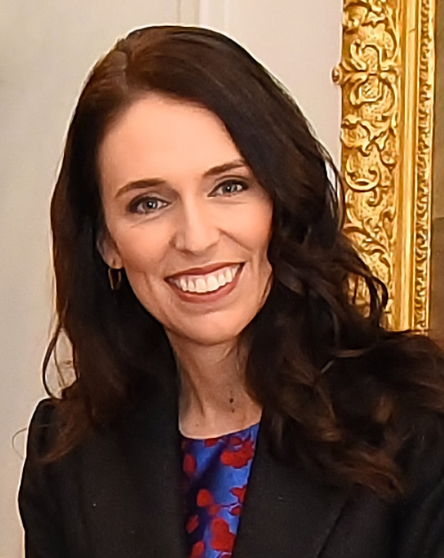 Jacinda’s second middle name is derived from her mother, Laurell (Bottomley). Jacinda’s father, Ross Ardern (David Ross Ardern), is a diplomat and former police officer, who has served as High Commissioner of New Zealand to Niue, from 2014 to 2018, and Administrator of Tokelau, from 2018 to 2022. Her uncle is LDS leader Ian S. Ardern. Jacinda has a daughter with her partner, television broadcaster Clarke Gayford.

Jacinda’s surname, Ardern, is from the Norman name Arderne. Her patrilineal ancestry can be traced to her twenty sixth great-grandfather, Rafe de Arderne.

Jacinda’s paternal grandfather was Henry Wiltshire Ardern (the son of Samuel Vincent Howard Ardern and Lydia Agnes Wiltshire). Henry was born in Feilding, Manawatu District, Manawatu-Wanganui. Samuel was the son of an English emigrant, Vincent West Ardern, of Norley, Cheshire, and of Harriet Ada Earl, whose parents were also English emigrants. Lydia was the daughter of English emigrants, Joseph Lewis Wiltshire, of Farnham, Berkshire, and Catherine Sarah Rider, of London.

Jacinda’s paternal grandmother was Gwladys Majorie McVicar (the daughter of Edwin Daniel McVicar and Elizabeth Mary McCrae). Gwladys was born in Frankton Junction, Hamilton, Waikato. Edwin was an Australian emigrant, from Newcastle, New South Wales, and was the son of Daniel Hugh McVicar, whose parents were Scottish immigrants, and of Rhoda Angelina Carter, whose parents were English immigrants. Elizabeth was a Scottish emigrant, from Bathgate, West Lothian, and was the daughter of Alexander McCrae and Elizabeth Shearer.

Jacinda’s maternal grandfather is Walter Eric Leo Bottomley (the son of Richard Midgley Bottomley and Louisa Durham). Richard was the son of English emigrants, Godfrey Bottomley, of Elland, Yorkshire, and Sarah Jane Leach, of York. Louisa was the daughter of John Mace Durham, whose parents were English immigrants, and of Isabella Cammock, who was of half Scots-Irish/Northern Irish and half Scottish descent.

Jacinda’s maternal grandmother was Lauraine Margaret Elizabeth Boyte (the daughter of Albert Victor Boyte and Lillian Elizabeth Andersen). Lauraine was born in Tauranga, Bay of Plenty. Albert was the son of English emigrants, James Butt Boyte, of Sturminster Marshall, Dorset, and Sarah Rabbets, of Child Okeford, Dorset. Lillian was the daughter of a Danish father, Andreas Christian Andreasen, of Copenhagen, and of Anna Maria Bartlett, who was of English descent.

Jacinda’s matrilineal ancestry can be traced back to her sixth great-grandmother, Sarah.