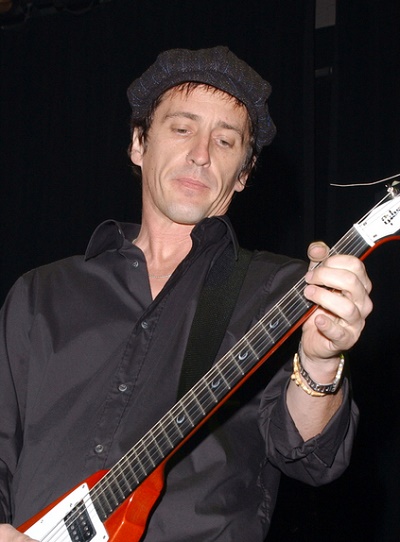 Stradlin in 2003, photo by Prphotos.com

Izzy Stradlin is an American guitarist, singer, and songwriter. He is the co-founder and former rhythm guitarist of the rock band Guns N’ Roses. Other members of the band include or have included Steven Adler, Duff McKagan, Melissa Reese, Axl Rose, Slash, and Matt Sorum.

Izzy is the son of Sonja and Richard Isbell.

Izzy’s paternal grandmother was named Elizabeth Adeline Barton (the daughter of Otto Barton and Lottie). Elizabeth was born in Indiana.

Izzy’s maternal grandfather was James O. Reagan (the son of John A. Reagan and Martha Rosetta Robbins). James was born in Tennessee or Kentucky.

Izzy’s maternal grandmother was Dora Gerlach (the daughter of Christian Gerlach and Anna Marie Brechtel). Dora was born in Arkansas, to a German father, and to a mother who was born in New York, herself to German parents, from Bavaria.

Genealogy of Izzy’s father (through his own brother) (focusing on his own father’s side) – http://www.findagrave.com