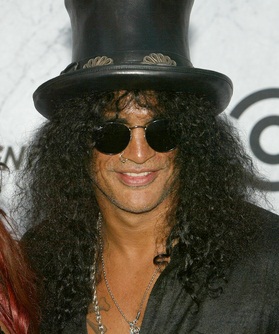 Slash is a British and American musician and songwriter. He was born in Islington, London, England, to an African-American mother, Ola Jorjan (Oliver), and a white English father, Charles Anthony Hudson. He was raised in Stoke-on-Trent, Staffordshire, and later moved to Los Angeles, California, when he was eleven years old.

Slash has two children with his wife Perla Ferrar.

Slash has sometimes been described on the internet as having Nigerian or Jewish ancestry. Both claims are inaccurate.

Slash’s paternal grandmother was Sybil Young (the daughter of George Young and Eliza Eleanor Bracegirdle). Sybil was born in Stoke-on-Trent, Staffordshire. George was the son of Charles Young and Martha Walker. Eliza was the daughter of William Bracegirdle, whose own mother, Elleanor Roberts, was Welsh, and of Mary Fletcher.

Slash’s maternal grandmother was Ola Rosemond Love (the daughter of Mack Love and Georgia Davis). Ola was born in Cotton Plant, Arkansas, and also had roots in South Carolina and Mississippi. Mack was the son of David Love and Sarah Jackson.