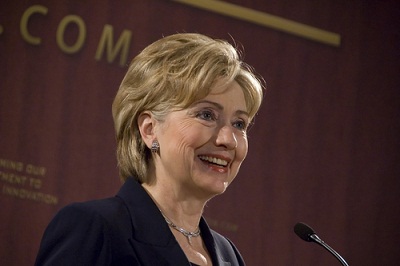 She was the Democratic Party’s nominee for President of the United States in 2016, when she won the popular vote, but not the electoral college. Hillary is the first woman to have been nominated for the Presidency by a major political party. As a Democrat, she has served as a U.S. Senator from New York, from January 3, 2001 to January 21, 2009, and as U.S. Secretary of State, from January 21, 2009 to February 1, 2013. She has also been Chancellor of Queen’s University Belfast, since January 2, 2020.

Hillary’s paternal grandfather was Hugh Simpson Rodham (the son of Jonathan Rodham and Isabella Simpson “Bella” Bell). Hugh was born in Kyo, Durham, England, to parents who were from Collierley, Durham. Jonathan was the son of Joseph Rodham and Elizabeth Scurfield. Isabella was the daughter of Thomas Bell and Elizabeth Dawson.

Hillary’s paternal grandmother was Hannah “Anna”/Annie Jones (the daughter of William Jones and Mary A. Griffiths). Hannah was born in Scranton, Lackawanna, Pennsylvania, to Welsh parents. Mary was born in Merthyr Tydfil, Glamorgan, the daughter of Mary.