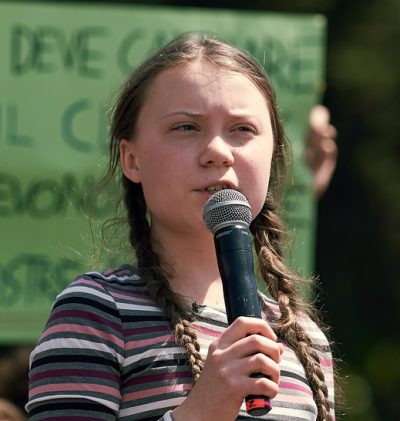 Thunberg in 2019, photo by Daniele Cossu/Bigstock.com

Greta Thunberg is a Swedish environmental activist, focusing on climate change. Her father, Svante Thunberg, is an author, arts manager, producer, and actor. Her mother, Malena Ernman, is an opera singer.

She was Time Magazine’s Person of the Year for 2019.

Greta’s patrilineal line can be traced back to her eighth great-grandfather, Olof Jönsson (died August 1672).

Greta’s paternal grandfather was actor and director Olof Thunberg (the son of Fritz Thunberg and Elsa Sofia Mattsson). Olof was born in Västerås, Västmanland. Fritz was the son of Carl Gustaf Eriksson and Augusta Margareta Thunberg. Elsa was the daughter of Erik Mattsson and Edla Sofia Vedlund.

Greta’s matrilineal line can be traced back to her sixth great-grandmother, Eva Jonsdotter.