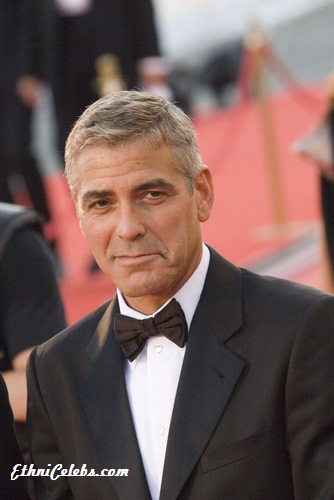 George Clooney is an American actor, writer, director, producer, and activist. He has starred in the Ocean’s films, From Dusk till Dawn, Good Night, and Good Luck. (which he also directed), and The Descendants, among many other roles. He won the Academy Award for Best Supporting Actor for Syriana (2005). George was selected People Magazine’s “Sexiest Man Alive” in 1997, and again in 2006.

George is the son of Nina Bruce (Warren), a beauty queen and city councilwoman, and Nick Clooney (Nicholas Joseph Clooney), a journalist and television personality. His aunt (father’s sister) was singer and actress Rosemary Clooney. He is the cousin of Rosemary’s sons, actors Miguel Ferrer and Rafael Ferrer. He is a first cousin, once removed, of actress Tessa Ferrer.

George’s father is of half Irish and one quarter German ancestry, with his other quarter being a mix of English, Scottish, and Scots-Irish/Northern Irish ancestry. George’s mother has English ancestry, along with more distant Scottish, Welsh, and remote French Huguenot and Dutch, roots.

George is married to lawyer Amal (Alamuddin) Clooney, who is of Druze and Lebanese descent. The couple has two children.

George’s paternal grandfather was Andrew Joseph Clooney (the son of Andrew B. Clooney and Crescentia/Cynthia Koch). George’s grandfather Andrew was born in Kentucky. George’s great-grandfather Andrew was the son of Nicholas Clooney and Bridget Byron, who were Irish immigrants. Crescentia was born in Ohio, the daughter of ethnic German parents, Joseph Henry Koch, from Prussia, and Margaret Fehler, from Lorraine, France.

George’s paternal grandmother was Marie Frances Guilfoyle (the daughter of Michael Joseph Guilfoyle and Martha Adelia/Delia “Ada” Farrow). Marie Frances was born in Kentucky. Michael was the son of Cornelius/Con Guilfoyle, from Tipperary, Ireland, and of Rosanna/Roseanna “Rose” Sweeney, whose parents were Irish, her father from Laois and her mother from Kilkenny. Martha was the daughter of Samuel Tully Farrow and Ellin Breckenridge “Ella” Vanden.

George’s maternal grandmother was Marvin Jackson Warren (the son of William H. Warren and Ida Lee Chambers). Marvin was born in Kentucky. William was the son of John Linton Warren and Mary B. Gatton. Ida was the daughter of John Martin Chambers and Lucinda/Lucy Ann Crow.

George is a half-first cousin, five times removed, of President Abraham Lincoln. George’s maternal great-great-great-great-grandmother, Mary Ann “Polly” Sparrow, was the half-sister of Nancy Hanks, who was the mother of President Lincoln (Mary and Nancy were both the daughters of Lucy Hanks). Through the same line, George is also a seventh cousin, once removed, of actor Tom Hanks. George’s maternal seven times great-grandparents, John Hanks and Catherine, were also the paternal six times great-grandparents of Tom Hanks.

Genealogy of George Clooney (focusing on his father’s side) – http://www.wikitree.com

Genealogy of some of George’s more distant ancestors – http://worldconnect.rootsweb.ancestry.com