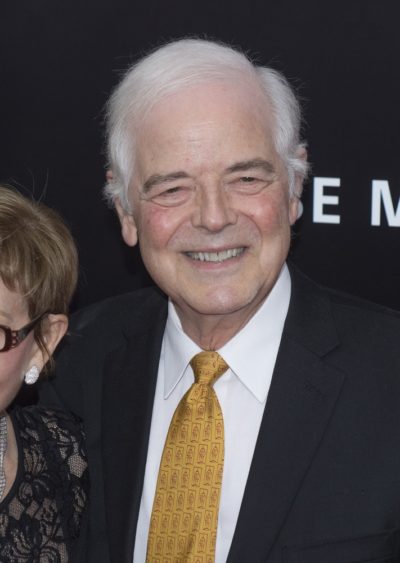 Clooney in 2014, photo by Prphotos.com

Nick Clooney is an American journalist, anchorman, and television host. He was a congressional candidate in 2004.

Nick is the son of Marie Frances (Guilfoyle) and Andrew Joseph Clooney. With his wife, Nina Bruce (Warren), a beauty queen and city councilwoman, he is the father of two children, including actor, director, and producer George Clooney. His sister was singer and actress Rosemary Clooney. He is the uncle of Rosemary’s sons, actors Miguel Ferrer and Rafael Ferrer, and the great-uncle of Rosemary’s granddaughter, actress Tessa Ferrer.

Nick’s paternal grandfather was Andrew B. Clooney (the son of Nicholas Clooney and Bridget Byron). Andrew was born in Kentucky. Nicholas and Bridget were Irish immigrants. Nicholas was born, c. 1829, in Windgap, County Kilkenny, the son of David Clooney and Mary McGrath, who were farmers.

Nick’s maternal grandfather was Michael Joseph Guilfoyle (the son of Cornelius/Con Guilfoyle and Rosanna/Roseanna “Rose” Sweeney). Michael was born in Mays Lick, Mason, Kentucky. Cornelius was born in Tipperary, Ireland, and likely was the son of William Guilfoyle and Margaret. Rosanna was the daughter of Michael Sweeney, from Laois, Ireland, and of Mary Denhanity, from Kilkenny, Ireland.

Nick’s maternal grandmother was Martha Adelia/Delia “Ada” Farrow (the daughter of Samuel Tully Farrow and Ellin Breckenridge “Ella” Vanden). Martha was born in Kentucky. Samuel was the son of John Bruer Farrow and Martha Jane Bramel. Ellin was the daughter of Preston B. Vanden and Adelia S. Cooker/Cooper.

Genealogy of some of Nick’s more distant ancestors – http://worldconnect.rootsweb.ancestry.com