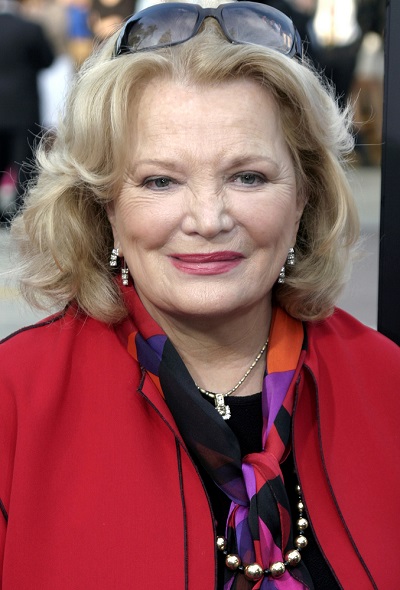 Rowlands in 2004, photo by Prphotos.com

She is married to businessperson Robert Forrest. She has three children with her late husband, director and actor John Cassavetes, to whom she was married until his death; Nick Cassavetes, Alexandra Cassavetes, and Zoe Cassavetes, all of whom have been involved in filmmaking, including acting, directing and writing.

Her father was of Welsh descent. Her mother had English ancestry.

Gena’s paternal grandmother was Emma Davies (the daughter of Edwin Davies and Jane Ann Hughes). Emma was born in Wisconsin, to a Welsh-born father and a mother who was born in New York, to Welsh parents. Edwin was the son of Thomas Davies and Margaret Williams. Jane was the daughter of Richard Hughes and Ann Williams.

Gena’s maternal grandfather was William Joel Neal (the son of Younger Neal and Martha Thomas Dyer). William was born in Arkansas. Younger was the son of William Jay Neal and Mouncy Nancy Robinson. Martha was the daughter of Joel Westley Dyer and Sarah Ann Talkington.