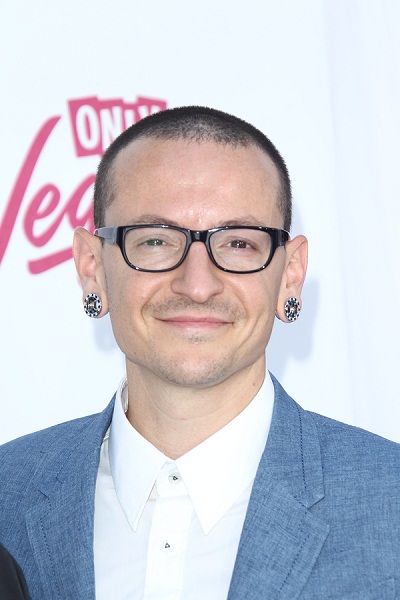 Bennington in 2012, photo by kathclick/Bigstock.com

Chester Bennington was an American singer, songwriter, musician, and actor. He was part of several bands, as the frontman for Linkin Park, the lead singer for Dead by Sunrise, and, from 2013 to 2015, the frontman for Stone Temple Pilots. Other members of Linkin Park are Rob Bourdon, Brad Delson, Dave Farrell, Joe Hahn, and Mike Shinoda. Other members of Stone Temple Pilots include/included Dean DeLeo, Robert DeLeo, Eric Kretz, and Scott Weiland.

Chester’s paternal grandmother was Marjorie Marie/Marvin John (the daughter of Herbert Henry John and Bertha Florene Webb). Marjorie was born in Ohio. Herbert was the son of The Rev. Robert Neuman/Newman John and Frances Adelia Snow. Bertha was the daughter of Andrew Jackson Webb and Barbara Jane Nye.

Chester’s maternal grandfather is Charles Henry Johnson (the son of George Russell Johnson and Gertrude Elizabeth Elmendorf/Elmendorff). Charles was born in California. George was the son of George H. Johnson and Minnie B. Brown. Gertrude was the daughter of Charles L. Elmendorf and Alinda F./T. Schall, whose parents were German, her father from Kassel, Hesse and her mother from Baden-Württemberg.