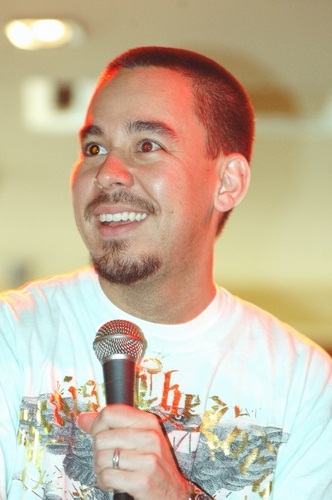 Mike Shinoda is an American musician, record producer, and artist. He is famous for being a member of the rock/hiphop group, Linkin Park. Other members of Linkin Park are Rob Bourdon, Brad Delson, Dave Farrell, Joe Hahn, and, until his death, Chester Bennington.

Mike’s father is a third generation Japanese-American who was interned during World War II because of his Japanese heritage. Mike’s mother is of German and English descent (it has been incorrectly reported that she is of Russian and/or Hungarian ancestry). Mike is married to author Anna Shinoda, with whom he has two children.

Mike released a song with his group Fort Minor called “Kenji” about his grandfather, who was interned during the war because of his Japanese heritage. Mike does not speak Japanese fluently, but he has read speeches in Japanese in front of Japanese crowds. One such speech can be seen here.

Mike’s paternal grandfather was Kuzo Shinoda (the son of Mitsutaro Shinoda and Kiku Hara). Kuzo was born in Japan.

Mike’s paternal grandmother was Sayo S. Shinoda (the daughter of Kurakichi Shinoda and Man Shinoda). Sayo was born in Japan.

Mike’s maternal grandfather was Troy Edgar Lovejoy (the son of Ulysses Grant Lovejoy and Julia Ann Honaker). Troy was born in West Virginia. Ulysses was the son of William Preston Lovejoy and Martha Hager. Julia was the daughter of James David Honaker and Susan Hartsella Linkous.