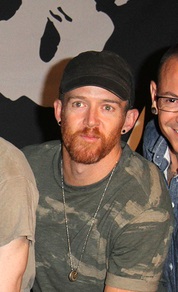 Farrell in 2014, photo by kathclick/Bigstock.com

Dave Farrell is an American musician. He is known by the stage name “Phoenix.” He is the bassist of the rock band Linkin Park. Other members of Linkin Park are Rob Bourdon, Brad Delson, Joe Hahn, Mike Shinoda, and, until his death, Chester Bennington.

His father, Lawrence J. “Larry” Farrell, is American. His mother, Kathryn Elizabeth “Kathy” (Cunningham), was a Canadian emigrant, from Halifax, Nova Scotia. Dave is married to Linsey S. Braeunig, with whom he has three children.