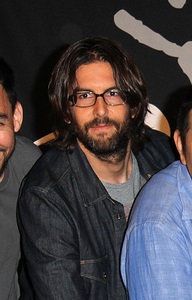 Bourdon in 2014, photo by kathclick/Bigstock.com

Rob Bourdon is an American musician. He is the drummer of the rock band Linkin Park. Other members of Linkin Park are Brad Delson, Dave Farrell, Joe Hahn, Mike Shinoda, and, until his death, Chester Bennington.

Rob is the son of Patty and Greg Bourdon.

Rob’s maternal grandfather was Manuel Yellen (the son of Abram/Abraham Jeleń, later Yellen, and of Rozalia Freda Deutsch). Manuel was born in California. Abram was a Polish Jewish emigrant, from Łomża, Podlaskie. Freda was a Hungarian Jewish emigrant, from Sátoraljaújhely, Sátoraljaújhelyi, Borsod-Abauj-Zemplen, and was the daughter of Majer Markusz Deutsch and Pepe/Peppie Perlman.

Rob’s matrilineal ancestry can be traced back to his third great-grandmother, Esther.

Genealogy of Rob’s mother (focusing on her mother’s side) – https://www.myheritage.com