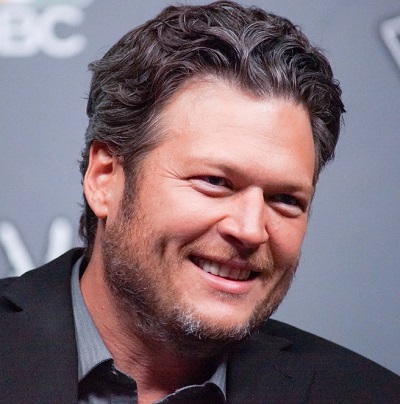 Shelton in 2014, photo by Prphotos.com

Blake Shelton is an American country singer, songwriter, actor, and television personality. He is the son of Dorothy (Byrd) and Richard Lee Shelton. He was selected People Magazine’s “Sexiest Man Alive” in 2017. Blake is married to singer, songwriter, fashion designer, and actress Gwen Stefani.

Blake’s maternal grandfather was R. A. “Bud” Byrd (the son of Obediah Dare Byrd and Mary Elizabeth Clapp). R. A. was born in Oklahoma. Obediah was the son of Joseph Franklin Byrd, Jr. and Nancy Jane Inman. Mary Elizabeth was the daughter of Elisha Clapp and Josephine Smith, whose mother was born in France.