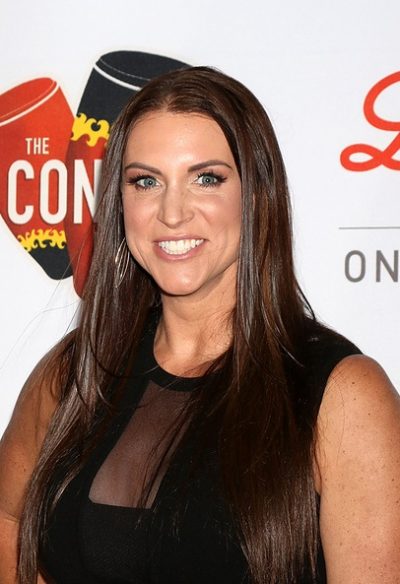 McMahon in 2016, photo by kathclick/Bigstock.com

Stephanie is the daughter of Vince McMahon and Linda McMahon (née Edwards), who are professional wrestling promoters and performers in WWE. In 1980, her parents co-founded Titan Sports, Inc.; they bought Capitol Wrestling Corporation in 1982, from Vince’s father, later renamed WWF, which then became WWE. Her father was its CEO until 2022. Stephanie’s mother was also Administrator of the Small Business Administration in the federal government, from 2017 to 2019. Her brother is businessperson and professional wrestler Shane McMahon. He has also worked as a performer, and behind-the-scenes, at WWE. She was raised mostly in Greenwich, Connecticut.

Stephanie’s parents were born in North Carolina, and both have (varying degrees of) Irish, English, Scottish, Scots-Irish, and Welsh ancestry, with roots in the state going back to the 1700s. Stephanie’s father also has German ancestry. Her mother also has remote Dutch ancestry.

Stephanie is married to professional wrestler, business executive, and actor Triple H, with whom she has three children.

Stephanie’s maternal grandfather was Henry Edwards (the son of Joseph Edwards and Annie Jackson). Henry was born in North Carolina. Joseph was the son of Edwin Edwards and Matilda Bass. Annie was the daughter of Sampson Jackson and Lucinda Bass. Henry’s patrilineal ancestry can be traced back to John Edwards and Jane, who emigrated to North Carolina from Wales. Stephanie’s third great-grandfathers Bedredon and Bright were brothers, making her great-great-grandparents first cousins.

Stephanie’s maternal grandmother was Evelyn Strickland (the daughter of Lester Strickland and Pearl Ammons). Evelyn was born in North Carolina. Lester was the son of Andrew Strickland and Ida. Lester’s paternal ancestry can be traced back to Edmund Strickland, who emigrated to Connecticut from England in the 1600s. Pearl was the daughter of Joseph Ammons and Effie.

Stephanie’s maternal tenth great-grandmother, Hester Van Vorst, was the daughter of Dutch immigrants, Jacobus Van Vorst and Saertje Fonda, through whom Stephanie is very distantly related to the Fonda family of actors.