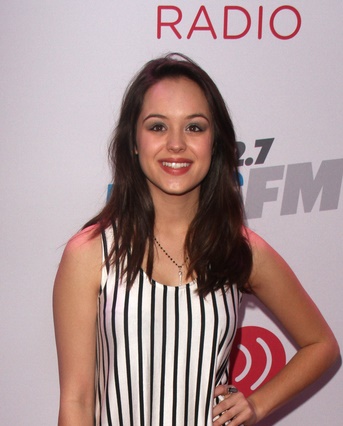 Orrantia in 2013, photo by Prphotos

Hayley Orrantia is an American actress, singer, and songwriter. She is known for portraying Erica Goldberg on the ABC comedy series The Goldbergs.

Her surname is of Basque origin, meaning “mountain pass,” and was inherited from her Mexican-American grandfather. Hayley is very proud of her Mexican heritage, and has said that she ticked the Hispanic box on documents in school. She is also learning Spanish as a second language.

Hayley’s paternal grandmother is Janet May Blanchard (the daughter of Milton Porter Blanchard and Pearl Edwards). Milton was the son of Johannes August Blanchard, who was of Swiss-French descent, and of Albertina Auguste Mathilde Berndt, who was of German descent. Hayley’s great-grandmother Pearl was the daughter of Ellis Edwards, who was born in England, to parents of Welsh descent; and of Ella Audrey Barnard, who was born in Utah, to English parents.