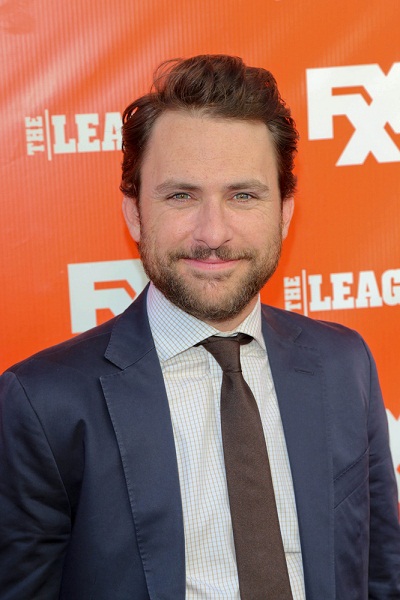 Charlie Day is an American actor, screenwriter, producer, and comedian. His roles include the series It’s Always Sunny in Philadelphia and the films Horrible Bosses and Pacific Rim, among others.

He was raised in Middletown, Rhode Island. His mother, Mary, was a piano teacher at The Pennfield School, and his father, Dr. Thomas Charles Day, was a professor of music history at Salve Regina University. Charlie is married to actress Mary Elizabeth Ellis, with whom he has a son.

Charlie’s family’s surname was changed from Del Giorno to Day before his father was born. Charlie’s father is of Italian and Irish ancestry. Charlie’s mother is of mostly English ancestry, with remote Irish, Welsh, French, and Scottish, roots. Many or most lines of her family have lived in the United States since the 1600s, largely in New England. Through his mother, Charlie is a Mayflower descendant.

Charlie’s maternal grandfather was Lawton Parker Greenman Peckham (the son of Reuben Wallace Peckham and Adelaide Marie/Maria Greenman). Lawton and his parents were born in Rhode Island. Reuben was the son of Elisha Clarke/Clark Peckham and Ardelia Peckham. Adelaide was the daughter of John Alonzo Greenman and Ida Lilla/Lila Bradley.

Genealogy of Charlie Day (focusing on his mother’s side) – https://www.geni.com

Genealogy of Charlie’s maternal great-grandfather, Roswell Mears Austin (focusing on his own father’s side) – http://worldconnect.rootsweb.ancestry.com