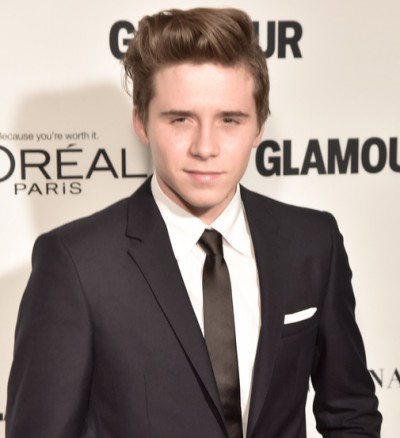 Beckham in 2015, photo by Prphotos.com

Ethnicity: English, as well as one eighth Ashkenazi Jewish, and 1/32 German

Brooklyn Beckham is a British-born photographer, chef, and model. He is the son of legendary footballer David Beckham and businessperson, singer, fashion designer, and model Victoria Beckham, who was a member of the girl group Spice Girls. His brother is professional footballer Romeo Beckham. Brooklyn is married to American actress Nicola Peltz.

Brooklyn’s paternal grandfather is David Edward Alan Beckham (the son of Aubrey Edward Jack Beckham and Doris May Hamilton). David was born in Edmonton, Middlesex, England. Aubrey was the son of Edward Charles Beckham and Queenie Violet Eldridge. Doris was the daughter of Charles Theodore Hamilton and Emily Beatrice Bartlett.

Brooklyn’s paternal grandmother is Sandra Georgina West (the daughter of Joseph West and Margaret Jean Wiggins). Sandra was born in Shoreditch, London, England. Joseph was the son of James Walter West and Hannah Llewellyn. He was raised in a Jewish household in London. Margaret was the daughter of Ernest Albert Wiggins and Rose Aldrich.